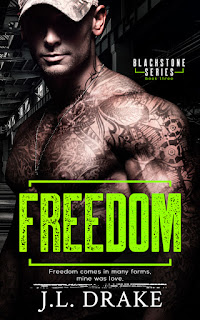 Note: An advanced reader copy (ARC) was provided by Limitless Publishing via Give Me Books Promotions.

Freedom is the third novel in J.L. Drake's Blackstone series, and it's simply more proof positive just how addictive this author's writing really is. This is Mike Irons's story, one that he shares with Catalina Mendez. One look at Mike stokes fear in those who wish they had never caught his attention nor that of his team, but in truth, Mike is a guy with a heart that cares more than anyone would think possible. His loyalty is to his family and his team, but while being on a mission is almost like second nature to him, transitioning back to civilian life isn't always easy. Meeting Catalina, however, provides just the respite he needs, giving him something to look forward to while he's back home. As strong as their connection may be, though, Catalina is quick to insist that nothing more can ever exist between the two of them, not when she sees the differences and not with all the secrets that each of them keeps. As resistant as she may be, Mike has got his sights on her, but when his two worlds collide, who'll be left standing?

One of my favorite things about J.L. Drake's books is the fact that my attention is caught from the first few chapters and it doesn't shift to anything else until I get to the very end. Mike was such a great male main character, one who cared for those who mattered most and had conviction in everything he did. As for Catalina, I loved that she had gumption and refused to kowtow to anyone. These two together may not have made sense at the onset to Catalina, but just like Mike, I had a feeling they were meant to be. Now, while Freedom reads well enough as a standalone, I'm going to highly recommend you read the Blackstone series in order. You won't regret it. Five stars. ♥