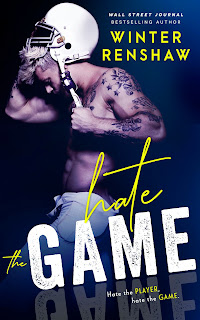 Winter Renshaw’s latest novel, Hate the Game, is a standalone college sports romance, the sport of choice being American football. Readers are introduced to college seniors Talon Gold and Irie Davenport; he’s the school’s star quarterback who’s been chasing her since they were freshmen and she’s the interior design major who refuses to be caught. Talon could have any girl on campus and he knows it, but he’s had his sights set on Irie from the moment he saw her. He’s tried time and time again and failed every single time to get her to agree to go out with him. She knows how guys like him are, and she refuses to be nothing more than another notch on his bedpost. She thinks he sees her as nothing more than a challenge, and once he’s done with her, she’ll be dumped just like every other girl he’s been with. When they end up not only being in the same class together but as study partners, Talon sees it as his last chance to get Irie to see him as more than a jock. This may not be a game, but he’s playing to win the one girl he wants.

One of my favorite things about this novel is that there isn’t time to waste—we’re told in the blurb and in the first chapter that Talon’s been trying to get Irie to give him the time of day—and hopefully time for a date (See what I did there?)—but she’s been rebuffing his advances from the get-go. Now, it’s not some sort of power trip on her end; she has valid reasons for saying no to him each time. And while I may have thought early on that he simply saw her as a challenge, as the chapters flew by, it was clear that this wasn’t a passing fancy or some itch that needed to be scratched for him. I also liked how there were more ties that could bind them together, i.e. interior design and architecture, than you’d think. Both Talon and Irie were main characters who had layers to them, and I appreciated that their story wasn’t one that was overly angsty but had enough to mesh with the lighthearted feel. Winter Renshaw did a great job writing a story about love, family, and how our dreams can change for the better. 4.5 stars for Hate the Game. ♥

Purchase Hate the Game on Amazon.