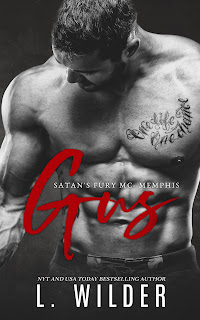 I've been excitedly waiting for Gus's book ever since I finished reading Gunner, and L. Wilder's sixth novel in her Satan's Fury MC: Memphis series certainly didn't disappoint. August Tanner is a man whose legacy has already been cemented in stone. He found a brotherhood when he became a part of the original Satan's Fury motorcycle club's Washington chapter and was entrusted to start a new chapter in Memphis, Tennessee, becoming its first--and currently only--president. His brothers would do anything and everything for Gus and vice-versa--he would go above and beyond for those who mattered. So when he meets a woman who tells him she was sent to him by her mother, Gus is taken aback. It's been over twenty-five years since he last saw or heard from Samantha Travers and she's remained the only woman to have ever owned his heart...and the only one to have ever broken it. But Sam had her reasons for walking out on the man who changed her life from the moment Gus rescued her. Their time together was short, the time apart far longer, and while many things have changed, maybe their feelings haven't.

To be fair, most of what happens in this sixth Satan's Fury MC: Memphis book has already played out in the fifth book, Gunner. What needs to be pointed out, however, is that Gus wasn't some "mere" supporting or side character in the previous novel; he was a peripheral character, someone whose presence was of notable importance in moving the story forward. So, while a lot of the story here is basically the same as in the other book, the fact that readers get to see things from the points of view of both Gus and Samantha was enough to get me interested. The history between them was also part of this book, and while the reason for why things abruptly ended the way they did in the past was mentioned previously, everything is made clearer here. There are also certain characters included here that I suspect we'll be seeing more of in L. Wilder's future books because I really, really, REALLY hope this isn't the end of the Satan's Fury MC: Memphis series. That doesn't mean, though, that I wouldn't be open to another spin-off focused on a different club chapter. Pretty please? I'm giving five stars to Gus. ♥