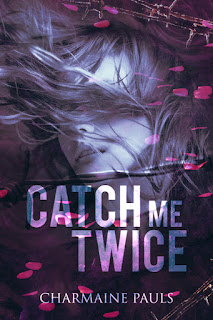 Catch Me Twice is an angsty second chance romance and my second read from Charmaine Pauls. Set in South Africa, the story is told in two parts. Readers are introduced to the main characters, Kristi Pretorious and Jake Basson, when she is eighteen and he is twenty-one. When they finally decide to act on their feelings for each other, Kristi finds herself unexpectedly pregnant. In order for her to avail of medical benefits, Jake decides the best thing to do would be to get married. Wedded bliss, however, wasn't theirs to claim, not with Jake leaving to follow his dreams in Dubai. In the four years since, all Jake has from his estranged wife are letters--unopened and unanswered--until her latest one finally catches his attention: Kristi wants a divorce. Now, Jake returns to South Africa--to the wife who wants to be married to some other man and the four-year-old son whom he's never met.

Charmaine Pauls makes it a point to inform her readers--both in the blurb and at the beginning of the actual book--that her newest standalone does, indeed, contain cheating, specifically on Jake's part. I have no aversion when it comes to cheating. It's a reality in countless relationships. Cheating is cheating; there's simply no justification for it, but again, as far as I'm concerned, it isn't a hard limit for me when it comes to entertainment (books, films, television shows, etc.). That doesn't mean I'd be okay if someone cheated on me or with cheating in real life. In the case of Jake cheating on Kristi, there was simply no excusing it, but it was part of his story--a part of the bleak existence he was meandering through for four years. I won't go into what was happening aside from the cheating because that would be spoilery, but suffice it to say, that his story is a compelling one, full of regret and rejection.

I think splitting the book into two parts was a good idea because it allows readers to see the beginnings of Kristi and Jake's relationship and the innocence and hope that was present before and then how they are four years past their separation. Both Kristi and Jake are complicated individuals, each one dealing with emotional scars caused by their respective fathers--Kristi's due to his abandonment and Jake's due to his constant disappointment. I admired the author's decision to stick with her creative vision for her novel. Let's face it, cheating is a no-go for a lot of readers, but there is a great deal more to this story than just the cheating. Jake and Kristi both have their struggles and nothing comes easily to either one of them. I enjoyed the story, although Noah's situation--he doesn't speak--isn't really delved into, which I think would have been a better direction rather than the sudden appearance of someone from Jake's sordid past. I may not have been a fan of the man Kristi planned to marry but his presence made sense. Still, I did mostly enjoy this story of redemption and reconciliation. Catch Me Twice receives four stars. ♥