Review: Nothing But a Dare by Molly O'Hare 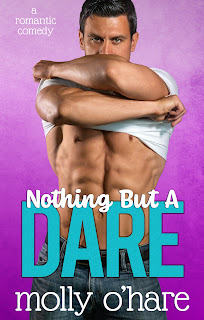 Molly O'Hare is a new-to-me author, and I had myself one heck of a fun-filled introduction to her writing by way of her latest release, a romantic comedy standalone entitled Nothing But a Dare. This was a romance that had an enemies-to-lovers slash second chance feel to it. Hunter James was the bane of Abigail Collins's life for several years, daring her to do outlandish and foolish things. Refusing was never an option, not with the motto that a Collins never says "no" to a dare. As children, Hunter couldn't help but poke her time and time again, but as teenagers, he pushed things too far, breaking not just Abbie's heart with his cruelty but hurting her spirit as well. It isn't until years have passed that Abbie sees him again--Hunter. Freaking. James--and this time around, she has no choice but to work with the guy on an advertising campaign for what could possibly be the company's biggest client. The sooner they get this campaign over and done with, the closer Abbie gets to severing ties with Hunter. However, what Abbie doesn't know is that Hunter has no plans of letting her go, even if he has to dare her to give him a chance to show her how perfect they would be together. Is this just another game or could it be true love?

This book was a bright spot in what had been a really emotional day. Molly O'Hare's writing was a true revelation, leaving me with a smile on my face by the time I was done reading Abbie and Hunter's story. Abbie was a female main character after my own heart, thanks to her anger management issues (I could totally relate), her love-hate relationship with her cat (who was a total diva in all her hairless glory), and the myriad of feelings and emotions she had towards Hunter. Freaking. James. Speaking of our male main character, I confess that there were a number of times that I was ever so tempted to invent some sort of contraption that would allow me to dive into the book and smack him upside the head; alas, it wasn't meant to be, but thank goodness the guy knew a thing or two about redemption and I had no doubt that he was sincere in his efforts to win the feisty Abs over. The pacing of the story and the development of the characters were nicely done, and I was fully entertained from the moment these two locked eyes on each other in that conference room. All's well that ends well, but it's the journey getting there that had me fully impressed, because as many hurdles as Abbie and Hunter may have had before reaching their happily-ever-after, it was well worth it all and so very much deserved and earned. Five stars for Nothing But a Dare. ♥

Purchase Nothing But a Dare on Amazon | Apple Books | B&N | Kobo.