Review: The Prince and His Bedeviled Bodyguard by Charlie Cochet (Paranormal Princes #1) 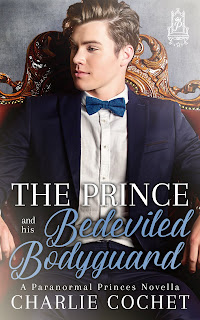 When Charlie Cochet announced that she had a new series in the offing, I may or may not have--definitely, absolute, undoubtedly MAY HAVE!--done a happy dance. I've been in love with this author's storytelling from the moment I started listening to her THIRDS series middle of last year. Since then, I've slowly worked my way through the rest of her work, having loved enjoyed her Four Kings Security series as well as Love and Payne, Beware of Geeks Bearing Gifts, and Kept in the Dark (the first in her new Locke and Keyes Agency series). Now, she's delving back into paranormal romance with her Paranormal Princes series, kicking things off quite nicely with the first book, a novella featuring a diva-ish ocelot shifter prince and his patient wolf shifter bodyguard ordered on a quest.

Prince Owin of the Ocelot Shifters was not a happy prince, not when he had a bodyguard who just so happened to be a wolf shifter. The fact that Grimmwolf of the Grimm Wolves pack had no qualms pushing Prince Owin's buttons may have added to the prince's irritation. So what if Grimm happened to be rather fetching (see what I did there?)? He smelled like wet dog when he was...well...wet, and he took great pleasure in testing the prince's patience. When Prince Owin is sent on a quest by King Alarick--aka the King of All Shifters--to prove his worthiness as the leader of ocelot shifters, all he's given is a magic satchel--which was more of a purse to be honest here--for whatever he may need and Grimm as his companion. Prince Owin and Grimm stuck on this strange quest may guarantee they'll be fighting like cats and dogs (snicker) or they may just surprise everyone, including themselves.

This novella was a fast-paced quickie of a read that was a whole lot of fun from start to finish. Prince Owin was snarky and spoiled but there was more to him than that, and thank goodness Grimm was there to help bring out the softer and more humble side of his favorite cat shifter. I adored Grimm, and no, it has nothing to do with my being more of a dog lover than a cat lover (although I'm a proud fur mom to both!). He was sweet and had a great deal of faith in Owin. I quite enjoyed seeing these two bicker and banter as their relationship evolved from prince and bodyguard to kinda-sorta-maybe friends and then more. 4.5 stars for The Prince and His Bedeviled Bodyguard. And I'm REALLY hoping there's a book planned for Alarick and Jean because holy crap, all those simmering feelings! ♥

Purchase The Prince and His Bedeviled Bodyguard on Amazon.