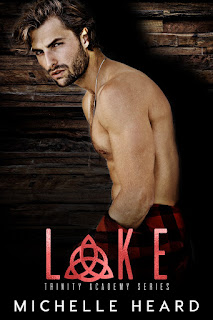 Among the three Trinity Academy books, Lake was certainly the one that I would consider the lighthearted read. Twenty-two-year-old Lake Cutler is set to exchange vows wtih eighteen-year-old Park Lee-Ann, a marriage arranged years ago between both sets of parents. Lee-Ann knows all too well what an arranged marriage looks like since her mother had to go through the same thing. She knows she's expected to be nothing more than a vessel to help produce an heir. For so long, she tried to resist going to America to fulfill her family's end of the arrangement, but the time has come for Lee-Ann to leave Korea behind and be wed to Lake. However, she's far from given up, and plans to ensure that Lake will hate having her around so much that he'll have no other choice but to break their engagement and Lee-Ann will be free to return to her home country. She'd never planned, thought, to fall for Lake.

Before I continue, I'd like to note that these books in the Trinity Academy series must be read in order because they are all interconnected: Falcon, Mason, and Lake. I wouldn't necessarily describe this third book as "fluffier" compared to the first two, but it doesn't have the same level of angst as its predecessors. That doesn't mean, though, that it isn't a good read. I quite enjoyed Lake and Lee's story, especially given their cultural differences and how they learned from each other as their relationship grew. Also, seeing how the bond between this new generation of the CRC family has strengthened even more over the span of three books had me smiling. Going into this third book, I thought we were going to be saying goodbye to this series, but Michelle Heard noted how much she loved it, so we're getting more from Trinity Academy next year! Yes! For now, I shall happily give Lake five stars. ♥

Read my reviews for the Trinity Academy series: