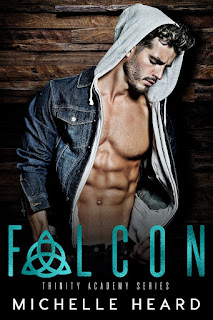 While this may be my first read from Michelle Heard, I have read a couple of her books written under her other pen name, Michelle Horst. Now, I know that they're the same person, but based on this new series starter of hers, I think I'm clicking more with Heard's writing than Horst's. Weird, I know, but it is what it is, what with Falcon setting the bar high for the rest of the Trinity Academy trilogy, with the two other books due for release over the next couple of weeks. Don't you love it when release dates for a series don not require you to wait for months on end?!

Falcon is the story of twenty-two-year-old Falcon Reyes and eighteen-year-old Layla Shepard. He's grown up with everything a guy could ever want, but what he needs most can't be bought with money. Alongside his best friends Mason Chargill and Lake Cutler, Falcon rules the very academy that their grandfathers founded. When Layla enters his world, he rescues her from tormentors, but the more time they're together, the more it seems as if she's meant to rescue him. Who'd have thought the guy born with a silver spoon would fall for the girl with the golden heart?

You know how you go into a book expecting one thing and getting something completely different? That's what happened with this series starter! I thought this was going to be a bully slash alpha-hole romance, and it turned out to be far more. I loved the connection that Falcon shared with Layla, as well as the one he had with both Mason and Lake. Layla had a light to her, and she was certainly a positive influence on Falcon and became exactly what he needed in his life. I'm giving Falcon five stars, with my fingers and toes crossed for the rest of the series! ♥