Review: It Was Always You by Andrea Johnston 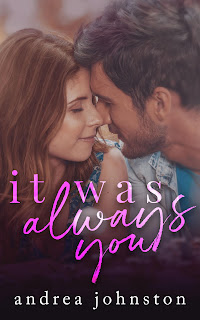 Oh, be still my heart! Andrea Johnston has added her own creative touch to the friends-to-lovers trope and weaved together an unforgettable love story about childhood best friends who were brought back together by fate but are tested when secrets come to light. For years, Allyson Honeycutt knew she could always count on Andrew Nelson. Ally and Andy were the best of friends, not caring even a little bit that she was a girl and he was a boy. They were best friends through and through, so of course, Ally already knew she was going to celebrate her eleventh birthday with him by her side...but he never showed, leaving without a word of goodbye, thereby marking that the beginning of "the birthday curse", leading her to stop celebrating ever since. Having just turned twenty-three, Ally instead finds herself making a new friend--D1331, who just happens to be twenty-four and is at the tail-end of his time behind bars for several misdemeanor crimes. It's unexpected friendship, just as unexpected as rushing back to her hometown of Pickerton Grove to take care of her grandmother only to cross paths with her childhood best friend who now goes by the name of Drew Collins. Their friendship rekindled, they begin to explore the onset of far deeper feelings, but when Ally uncovers Drew's secret, will it be her turn to walk away from him?

Okay, quick confession: I have a "bad" habit of trying to figure out a story based on the blurb alone or within the first couple of chapters. It may take the "fun" out of reading, but yeah, that's just a personal quirk of mine, and in the case of Ally and Drew's story, it was pretty easy to figure out where their story would lead to, thanks to the blurb and a couple of tidbits in the first chapter. Now, as much as I was a happy camper because my hypothesis was proven to be right, the excitement and enjoyment weren't diminished one little bit while I was reading the book. Nope, Andrea Johnston's storytelling simply wouldn't allow such a thing, and if you're familiar with her writing, you'll know what I mean. She's written a beautiful and touching love story about two people who felt a great deal of loss when they were no longer in each other's lives as children, only to be gifted with the opportunity to find one another more than a dozen years later. I loved seeing these two not just re-discover their platonic connection but to delve into more romantic and passionate thoughts and emotions. Aside from the romance aspect, my heart appreciated the reminders that home is not always a location and that family doesn't necessarily mean the one you are born into. It Was Always You is a recommended read, and one I'm easily giving five stars to. ♥

Purchase It Was Always You on Amazon.