Review: Kiss Me Tonight by Emma Hart (Kiss Me #2) 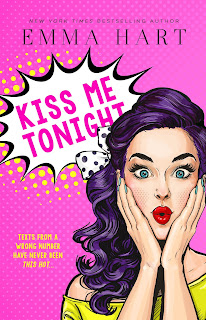 Kiss Me Tonight is the second book in the Kiss Me series penned by bestselling author Emma Hart. This is the story of twenty-six-year-old florist and single girl Reagan Wright, who unexpectedly receives a rather, erm, notable photo of a male human appendage. Naturally, she informed the sender that he mistakenly sent it to the wrong person; looking at it for an extended (snicker) amount of time was, well, unavoidable. She was a woman and she had a eyes after all! Belatedly, however, the one thing she should have done was change the batteries in her smoke alarm. In her defense, that dick pic was one heck of a distraction, and maybe if she had been more focused on other things, she wouldn't have been caught unaware when a fire overtook her apartment building. Now she's stuck in the hospital with every single thing she owns now up in smoke. But Reagan is a survivor and maybe meeting the firefighter who rescued her during the fire will help lift her spirits. Only when she meets Noah Jacobs, it isn't the fact he's her hero who takes her breath away--it's the fact that Noah is THE guy behind the dick (pic)!

Just like the book before it, book two in Emma Hart's romantic comedy Kiss Me series was highly enjoyable lighthearted fare that left a smile on my face by the time I was done reading it. It would be safe to say that Noah made QUITE an impression on Reagan twice over, and that was even before they had actually met in person. I liked the connection that these two shared, and their relationship evolved in a believable enough time table and manner of progression that it was like Goldilocks finding the "just right" sort of pacing. As much as I love and am addicted to angsty romances and love stories (yes, those are two different things), that doesn't mean I don't adore lighter reads, and Hart has proven herself several times over in this particular sub-genre. If you have a thing for fun rom-coms or are simply a romance reader looking for a good weekend read, check out Kiss Me Tonight. Four stars. ♥

Read my review for the Kiss Me series:

Kiss Me Not (book one) - four stars - My Review