Review: All the Way by Kendall Ryan (Hot Jocks #2) 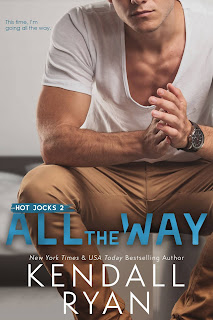 Two books in and chances remain high that Hot Jocks could very well end up becoming my new favorite series from Kendall Ryan! All the Way is the story of Owen Parrish--number twenty-two and star goalie for the Seattle Ice Hawks. He's one of the best at what does on the ice, and there's no denying he's got a whole lot of game off the ice as well. Women want him and he knows how to give what women need--which is why it only makes sense for his best friend, Becca, to reach out to him. She feels it's finally time for her to get out there and see what the dating world has to offer, but Becca's anxiousness--no thanks to her past--have her wary of getting together with the wrong guy. Maybe Owen can help her out by showing her the ins and outs and everything else in between when it comes to hookups, something her best friend is quite adept at. But the idea of helping Becca find some stranger on a dating up to hook up with isn't something Owen is exactly thrilled about...not when he'd rather help her in a more hands-on manner. What happens when teaching Becca to hook up has Owen hooked on her instead?

When a series starter like Playing for Keeps leaves you with lofty expectations, feeling both anxious and excited for the next novel is a given. Thank goodness that Owen and Becca's book met those expectations quite adeptly. If I had to nitpick, I guess it would be Becca not having a last name (although if she does actually have one that's mentioned in the book, please feel free to let me know!). Weird, I know, but I prefer having the characters in the books I read have a first and a last name; think of it as a personal quirk of mine. However, I digress... Owen and Becca's friends-to-lovers romance has the creative twist of an incident in Becca's past that's left her traumatized and at a loss as to how to move forward with the more intimate side of her life. When Owen steps in the way he does, it's almost as if he's finally giving himself permission to act on the attraction that he's had towards his best friend. After all, it's not as if he's blind--he knows how beautiful and how good of a person she is. I enjoyed seeing how their relationship changed from friends to more, which is why All the Way gets five stars. Bring on book three! ♥

All the Way (book two) - stars - My Review (posted above)

Purchase All the Way on Amazon | Apple Books | B&N | Kobo.