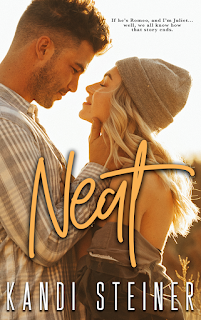 Kandi Steiner takes readers back to her Becker Brothers series with the second novel, Neat, which features the third among the four brothers, twenty-six-year-old Logan Becker. Continuing their father's legacy in the Scooter Whiskey distillery in their hometown of Stratford, Tennessee has always been of utmost importance to Logan and his brothers, especially when it's a legacy that their family believes is actively being diminished and taken away from them. His older brother continues the tradition of barrel raising and is the most well-known barrel raiser around, while Logan takes pride in heading up tours around the distillery and sharing its continuing history, currently holding the position of lead tour guide. He's got his sights set on becoming the next manager, but when he's informed that Mallory Scooter--the twenty-six-year-old daughter of the company's current owner and the granddaughter of its founder--is to train under him, Logan suspects the promotion isn't as sure a thing as he thought. Now, he has to play nice with the rebellious beauty he crushed on in their teenage years but could be an insurmountable hurdle to become tour manager. The more he spends time with her, however, the faster he falls for this adult version of Mallory, but when all is said and done, will Logan and his family--and his heart--bounce back once he learns that while he was playing nice, Mallory was playing with his hopeful heart for her own ambitions?

Just like the book before it, this second installment in Kandi Steiner's Becker Brothers series easily captured my attention and quickly snagged my heart along the way. Now, while both are touted as standalone reads, I'm going to recommend that they be read in order because of what I feel is a major story arc that will play out throughout the series--the arc involving the guys trying to uncover the truth about their father's death. That being said, Logan and Mallory's story was different from the one in Noah Becker and Ruby Grace Barnett's book, although it did share the story angle of issues within the female main character's family--Ruby Grace with her parents and Mallory with her father and parental expectations. I loved the whole opposites attract touch between Logan and Mallory, especially since he was very organized and preferred order while she had a far more artistic side that relished in spontaneity and creativity. Admittedly, I had a feeling that things were going to go awry regarding the whole promotion thing and how Mallory's presence in the company relates to it, but while I was right and my heart broke for everyone concerned, I do think that things are becoming increasingly...interesting...when it comes to solving the mystery of what really led to John Becker's death. It did take me most of the book to warm up to Mallory, so that did dampen my enthusiasm but I did adore Logan. I'm giving Neat four stars and cannot wait for Mikey's book! ♥

Read my reviews for the Becker Brothers series: