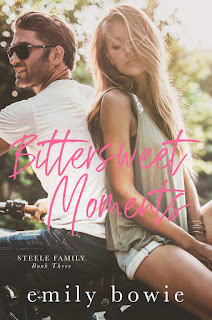 Emily Bowie's Steele Family series got off to an okay start for me with Stolen Moments, bouncing back with a good second serving in Moonlight Moments. With higher expectations going into book three thanks to my enjoyment of book two and the peek at what was waiting for readers, I was looking forward to reading the second chance romance that awaited me in Bittersweet Moments. This was Brax Steele and Raya Stratton's story, a couple whose love story came to an abrupt halt when Raya ended things between them and then dies in a fire soon afterwards. Five years later, Brax accompanies his country singer brother during one of his concerts when a woman who looks shockingly familiar catches his eye. Is he seeing a ghost or could the one woman he's loved and has never forgotten actually still be alive? Raya may have had her reasons for breaking his heart and faking her own death, but when she reveals another--and far more devastating--secret, will Raya be able to convince the man she still continues to love to forgive her and maybe even take another chance at being together or will he now be the one to walk away?

I'm always game for a second chance romance, and Brax and Raya's seemed to have elements to it that I usually go for...at least that's what it looked like based on the blurb. I had a number of issues with the book. I didn't feel any connection between Brax and Raya nor did I feel connected to them or their story as a couple. I struggled to believe that these two had the sort of love that sustained them during their five years apart. Then there were all the secrets Raya kept from Brax and the choice she made to not just lie but to keep certain things from him, believing that this was what was best for him. The whole reconciliation also felt forced, as if they were thrown together and well, they were in the same place at the same time, so why not? There was also several times where the writing felt choppy, with an abruptness when it came to starting a new chapter. I also wasn't a fan of Nate's, who seriously acted more like Raya's possessive boyfriend than her bodyguard, even with the explanation given later in the story. So yeah, I struggled with Bittersweet Moments a few times, and it wasn't my favorite. Three stars. ♥