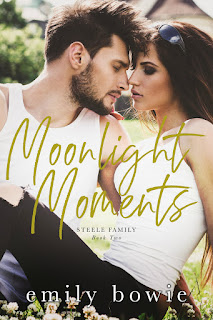 Moonlight Moments is the second novel in the Steele Family series from Emily Bowie, and it's a romance with a dash of suspense added to it. After five years in prison, Kellen Steele is a free man. Returning to his hometown of Three Rivers and healing the wounds caused by his decision to distance himself from his family once he was incarcerated are at the top of his to-do list but the former may be far easier to do than the latter. On his way to Three Rivers, however, he catches sight of a woman with car trouble, but Sloan Tate could spell trouble for him. She's no damsel in distress and she doesn't like accepting help, especially from someone like Kellen. She's a distraction he doesn't need, not when he's got his mind focused on one particular goal that he can't tell anyone else about. Pretty soon, though, it becomes clear that she could be exactly what he needs in order to get a hold of what's demanded of him, but the more he's around her, the more Kellen wants to have Sloan become a permanent part of the town and his life. What happens, though, when Sloan's dark past and Kellen's shocking secret collide?

Book two was definitely a notch above its predecessor, thanks to a story that had more meat to its bones and main characters who had the whole back and forth down to a science. Kellen's secret is one that's revealed to readers pretty early on, and it was definitely an interesting one. You can almost tell from the moment that he and Sloan get together that the secret is going to be a make or break for their relationship. There were a handful of supporting characters, and while there were definitely some who were more engaging than others, none of them necessarily stole the spotlight from Kellen and Sloan. I am, however, curious about one of Kellen's siblings and what looks to be a second-chance romance of sorts in his future... Maybe. At least that's how it felt to me given that his current relationship was stuck in neutral and seemed doomed. There's also another supporting character I wouldn't mind meeting again sometime in the future, maybe in another spin-off or something, because he was a good guy who was caught up in...stuff. Fingers crossed that the series continues to get better! Four stars for Moonlight Moments. ♥