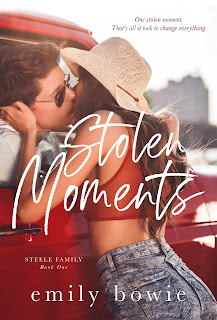 Stolen Moments is the first book in the Steele Family series by Emily Bowie, and it's my first read from her as well. This falling-for-your-sibling's-best-friend romance takes place over several years, and begins when seventeen-year-old Shay Steele, the youngest and only girl among the Steele siblings, hopes to make her brother Kellen's best friend see her as more than a pseudo sister. Eighteen-year-old Luke Rogers, indeed, takes notice of the girl he's always called "LS"--a nickname her brother's use as well, but while it meant "little sister" to them, it meant "Little Shay" to Luke. But how can he make a move on her without drawing the ire of his best friend and getting into trouble with Shay's other older brothers? What Luke and Shay end up sharing instead are stolen moments--moments that they cherish for the meantime, hoping that the time will come when they can be open about their relationship and the love they share. But someone's already taken notice of them, and they aren't happy about what's been going on. Will their love have a true chance to flourish or will someone put a stop to it permanently?

This series starter was a slow-go for me, plus there was a heck of a lot going on that the focus would shift away from Shay and Luke time and time again. As far as their romance was concerned, there was a sweetness and innocence of sorts to what they shared together, and a lot of that had to do with their age. Their interactions were cute, but there were also moments where Shay's treatment of Luke would go from flirty to irritated, especially when the issues with Kellen started. Speaking of Kellen, the guy definitely stole the limelight, and I found myself a wee bit more invested in finding out what was going on with him than Luke and Shay's relationship. I did really like Luke, though, and think that he could be someone that would click as book boyfriend material for a lot of romance readers. Overall, Stolen Moments was a pretty okay read; it gets 3.5 stars. Fingers crossed for Kellen's story in May. ♥