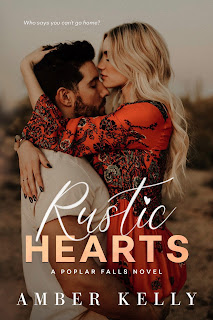 Amber Kelly starts off her brand-new Poplar Falls series with Rustic Hearts. This novel features a woman who returns to the small Colorado town she once considered home, Poplar Falls, to mourn the passing of her paternal grandmother and unexpectedly discovers love, forgiveness, and family in the process. I read Kelly's debut release, which was a duet that had a bit of a heavier feel to it--darker with a hint of suspense--so I was very pleasantly surprised by how this new series starter of hers had a lighter touch with enough angst to keep the addict in me rather satisfied. I enjoy small town romances in general because they are, more often than not, about heart and home, and readers get these in impressive form with this still relatively new author's recently published romance.

When Sophia Doreen Lancaster was twelve, her mother told her they would be leaving their ranch in Poplar Falls, Colorado and flying to New York. It meant leaving the only home she had known and the only life she relished along with not being able to say goodbye to her father and her horse. It would take more than decades before the passing of her Gram would call her back to the family ranch--to the relatives she hadn't seen in over twenty years...to the father she believed wanted nothing to do with her. It's also there that she meets Braxton Young, the nephew of the woman her estranged father married. There was no love lost between Sophia and Brax from the moment they meet. Over the years, Sophia has made her assumptions about her old life, as does Brax when he first meets his step-uncle's daughter. Her return to Poplar Falls is temporary, but will Sophia leave forever changed?

I had mixed feelings with the author's debut duet--I wasn't a fan of the first book, but loved the second one. With this new series starter, however, I was very much on-board from the moment we meet a pre-teen Sophia in the prologue. I liked see that being in a big city like Manhattan hadn't changed who she was at her core, even if she had certain notions due to what she believed to be true. Because she was already a woman who was independent and had a pretty good head on her shoulders, I feel like the growth that she did have in the story was just enough for where she was in her life, making her someone easier for me to relate to. I did like that being around her relatives on her father's side as well as getting to know Brax allowed her to open her heart to possibilities she may not have considered otherwise. Amber Kelly maintained a good balance of a lighthearted romance with some sexual tension and family drama, and I cannot wait to read more from this series. I'm giving Rustic Hearts 4.5 stars. ♥