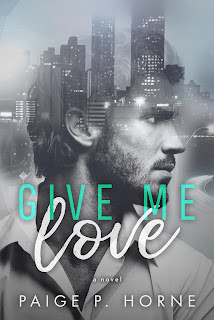 Give Me Love is the first book in the Give Me series, and it's my first read from Paige P. Horne. The blurb hints at an angsty read, and angst is definitely what you get with this series starter. Twenty-five-year-old Kathrine Harrison was abandoned by her mother as a child and left at the abusive hands of her stepfather. She learned early on that the only person she could rely on was herself, a painful lesson that she carries with her into adulthood. When she meets thirty-three-year-old Bryson Grant, there's something about the man that captures her interest and curiosity. Neither one of them is looking for a relationship--she's just come out of one, and the only person he's ever been committed to is his younger brother, Jace. Even as they try to keep things between them simply physical, the connection they share draws them in deeper. But can two people as damaged as them ever have a real future?

This was a pretty good beginning to a series, with readers getting enough in terms of the histories, although more so on Kat's end compared to Bryce's, in order to understand why they've become the adults that they are today. There's a particular point made about how much in common these two have, and it isn't too much of a stretch to figure out just how connected they are. I did find Kat rather immature for someone in her mid-twenties, and while I get why she doesn't really have a strong a footing as you'd hope, she came off as wishy-washy for the most part. Bryce is broody, dark, and very much alpha--which hearkened to several other fictional characters I've met in a few of my reads over the years--but there was this air of mystery to him, which had me wishing that more of his past was brought to our attention, although it's highly possible we'll get that in the next books. There is some character and story development, but given that this is just the first in the series, it was a no-brainer that this was going to have a cliffhanger at the end. Thankfully, book two is only a couple of weeks away. Four stars go to Give Me Love. ♥

Purchase Give Me Love on Amazon | Apple Books | B&N | Kobo.