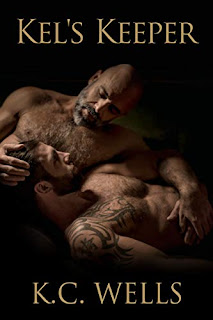 It's been a good while since I last read something by K.C. Wells, but not due to anything negative. So when I saw that she had a new release and with a blurb that certainly caught my attention, I was certainly looking forward to diving into Kel's Keeper. Now, I've read several of Wells's books in the past, and I've enjoyed them, so my expectations going into this latest standalone were relatively high. This was the story of twenty-four-year-old graduate student Kelvin Taylor and forty-seven-year-old software designer Luc Bryant. Kel's family has been neighbors with Luc for nearly all of Kel's life, but while Kel used to have a good relationship with Luc growing up, Luc's kept his distance over the past few years. When Kel unexpectedly loses his parents during the same time he's come home for vacation, it's Luc who becomes his greatest pillar of support. When memories and feelings of guilt get to Kel, Luc offers his own home for Kel to stay at temporarily. Being in close quarters could have the two men coming to terms with their feelings for one another, for Kel to embrace his sexuality, and for Luc to risk his heart.

There was a lot about this book that I liked, but that's balanced out by one specific thing didn't really make good on its promise. I was all for the mutual crushing on slash fantasizing about each other for far longer than they both realized and same goes for the age difference. I also appreciated Kel's being torn about the teachings of his religion (not to be confused with one's faith) and conservative parents and fully accepting his sexuality and the individual that he is. I liked seeing Kel and Luc establish their relationship from being friends and then to more. Where I found the book iffy was that the blurb made this story sound like it was about the two main characters engaging in a relationship that involved the Daddy kink. Now, there IS Daddy kink, BUT it isn't as prominently featured as I'd originally excepted it to be. Don't get me wrong; K.C. Wells's writing remains as good as my previous reads from her, but the blurb basically promised a specific thing and all we get is a hint of that promise. All things considered, Kel's Keeper was still a good read, one that held my attention from start to finish, which is why it garners four stars. ♥