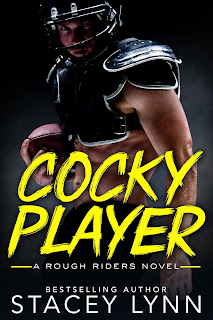 I may have a thing for Stacey Lynn's Rough Riders series, and by "thing", I mean I may be rather obsessed with it. I absolutely loved the first two novels, although the third one did stumble just a wee bit, and by "stumble", I basically gave it 4.5 stars instead of the five-plus stars books one and two received. Things have bounced back quite nicely, thank you very much, because book four was a story that totally snagged me hook, line, and sinker. Cocky Player is the story of the Raleigh Rough Riders's running back, Connor Quinten, who is drawn to a gorgeous young woman in a white dress on the dance floor of the club he co-owned. She was like an innocent angel who called to him, and he knew that she would be the one he would end up in bed with. However, the last things Connor expected was for the woman to run out on him and for her turn out to be a virgin. And then he sees her again, and if he thought her leaving and her virginity were surprising, the realization that his angel is actually Brenna Kemper, the thirty-three-year-old daughter of the team owner, shocks him to end. Connor knows the best thing to do would be to keep his distance from her, but Brenna is still intent on losing her V-card and she wants to Connor to do it. It's nothing more than sex, plain and simple. But nothing about these two feels plain nor simple...

Connor and Brenna intrigued me from start to finish, both as individuals and as a couple. These two were not exactly the sort of people who were forthcoming with as far as their pasts were concerned. Even as they start to explore their, for lack of a better term, sexual non-relationship, there's a natural curiosity about each other, but neither one is actually eager to share anything about themselves. While the romance itself isn't exactly slow burn, the getting-to-know-you part was, and funnily enough, I loved the anticipation of finding out more about these two outside of their sexual encounters. I also liked seeing how Connor was with his teammates, and in turn, how Brenna was with her family. Connor, after all, didn't really have any family to speak of so it was football, which included those teammates of his that became his closest friends, that always came first, while Brenna's own parents and siblings, plus her best friend and roommate, Gina, were highly protective of her and for good reason. Stacey Lynn did not disappoint with this story of overcoming adversity and believing that one is worthy of their own happily-ever-after. I'm not sure if Cocky Player is the final Rough Riders novel--I certainly hope that it isn't because it's become one of my favorite sports romance series--but either way, this book easily deserves five stars. ♥