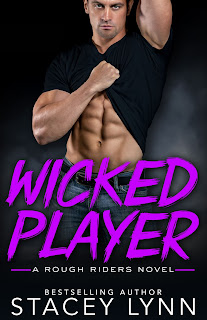 Bestselling author Stacey Lynn returns to her Rough Riders series with book number three, Wicked Player, which is the story of a man named John and a woman named Beth who meet and share the kind of extraordinary connection that they once thought elusive...except she's wearing a blindfold and neither one is using their real name and they're in an exclusive sex club. "John" is thirty-two-year-old Raleigh Rough Riders wide receiver Gage Bryant; "Beth" is twenty-six-year-old XTCP television reporter Elizabeth Hayes.

Gage has a reputation for being a stellar athlete and an honest-to-goodness good guy who gives back to the community, particularly when it comes to the families with children at the local hospital. He's got a secret, though, and he can't risk it ever getting it, not wanting to be a disappointment to his parents, especially since his focus is on the game he loves and living up to the legacy of his late brother. Keeping his personal life private, however, becomes all the more difficult when he realize his "Beth" is a TV reporter.

Elizabeth is given an opportunity to prove she's ready for the primetime news desk when her boss assigns her to cover the activities leading up to the grand opening of the Family Center over at the Children's Hospital. The main donor is none other than football star Gage, and while Elizabeth can't deny how hot he is, he seems to have an adverse reaction to her whenever she's around. When she realizes that he's actually "John", it could be the beginning of something worth exploring, but will she risk her career for it?

I've loved the Rough Riders series from the get-go, and I loved Gage and Elizabeth's story just as much as the first two books. There wasn't any over-romanticizing of certain situations, meaning that Gage and Elizabeth reacted in a believable manner when hurdles were thrown their way, given that they barely really knew one another outside of sex in the beginning and that they were flawed humans. My rating is 4.5 stars mainly because there were times the text was repetitive, otherwise, I'd have given Wicked Player higher. ♥