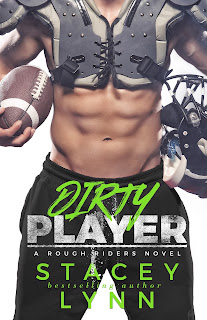 She was beautiful. Not classy beautiful. Not elegant. In fact, there were probably thousands of women in the world you could line up next to Shannon and the other women could be classified as "more beautiful".

But I thought she was perfect. She was the complete, perfect package, and every time I talked to her, every time I was around her, I began to realize more and more that I didn't just love fucking her, I was starting to fall for her.

Her voodoo pussy and handful-sized tits sucked me in, but it was her intelligence and her smile and her sass that pulled me toward her in a way I hadn't experienced in so long, I'd forgotten what falling in love felt like.

And this was it. It took weeks.

This series starter is so downright dirty it's so damned good! I've read a few of bestselling author Stacey Lynn's books in the past, but Dirty Player is, without a doubt, my favorite and her at her best. The first in the Rough Riders series--which is about the players of the fictional Raleigh Rough Riders professional football team--this was such an engaging story of lust and love between two headstrong and independent people who are unapologetic in who they are and how they lead their lives. When Rough Riders tight end and reigning MVP Oliver Powell and jewelry designer and maker Shannon Hale meet, it's a memorable beginning to an unexpected and unforgettable love story, one that neither of them was looking for. Oliver and Shannon are randy, their tale is raunchy, but at its very heart, this first in a series is fucking romantic.

At twenty-eight, Shannon Hale is starting a new phase in her life. Having ended her long-term relationship and subsequent engagement, she's getting the opportunity to begin again and she's doing it with the support of her younger brother, Beaux, the new quarterback for the Raleigh Rough Riders. The fact that Beaux happens to be on the same time as the one player she's been excited to meet is a bonus. Thirty-year-old Oliver Powell lives up to his reputation. He's thinks he's God's gift to the all of womankind and to the sport of professional football. He's used to having females chase after him, but Shannon is the kind of woman that deserves to be pursued. For as long as they both remember that getting together is nothing more than sex and ends after the preseason, it's all good. But what if "more" turns out to be much better?

Oliver, Shannon, the rest of the cast of characters, and this fantastic sports romance left me with one major book hangover. Oliver and Shannon evolved as main characters, learning from past mistakes and opening themselves up to new possibilities, and the overall story developed in such a way it was virtually impossible to look away longer than a split second for fear that you were going to miss out on something. Their relationship goes through a metamorphosis as does Oliver's with his teammates, particularly Beaux, and the sport he loves, as well as Shannon and her faith in herself and her gift for designing and making jewelry. Dirty Player also did an exceptional job introducing readers to potential main characters that'll get their stories told as the series continues. This book is a five-plus-starred 2016 favorite sports romance. ♥