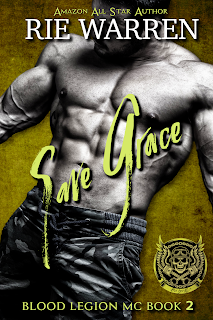 Save Grace is the second book in the Blood Legion MC series penned by Rie Warren, and I'm going to recommend that you read the books in order--starting with Cry Mercy--because of the recurring characters and an interconnected story although both books have different couples. After the club's raid on the White Lair, the women are rescued but Grace Delahunt has gone missing, and Killian Slade has made it his mission to locate and extract her from what he suspects may be a situation worse than what she was in before, and time is running out.

Grace doesn't want to be found nor does she need to be rescued, not when she sees herself as damaged goods--someone who's been used and abused too many times to count. However, there's a new client that Grace is given, and he's different from all the others that came before him. This man doesn't make her feel as if she's nothing more than a temporary possession. He makes her feel...human...like a woman rather than merchandise. She's sure he'll regret ever laying eyes on her once he knows the truth, but what about when she learns who Slade really is?

This book isn't for the squeamish. There's a frankness about it, so don't expect any sort of sugarcoating as to what it is Grace is forced to endure while in captivity. There's a strength to Grace that is subtle but there's no denying that it's there, and that makes her a standout main character. The same goes for Slade, but in his case, he's a man who has been to hell and back and is now willing to save Grace from her own hellish circumstances. From the action and suspense to the romance and sex, Save Grace maintained its momentum throughout. It gets five stars. ♥

Save Grace (book two) - five stars - My Review (posted above)

Purchase Save Grace on Amazon.