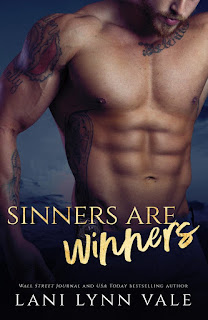 Sinners are Winners is, indeed, a winner read. This fifth KPD Motorcycle Patrol novel from Lani Lynn Vale was every bit as entertaining as I'd expected it to be, thanks in large part to Vale's patented brand of swoon-worthy romance and laugh-inducing comedy. As hinted in the previous release, here we have Lachlan Downy, Jr. and Saylor Spada's story. When the two first meet, she's on a blind date she wouldn't wish on her worst enemy and he's with his sister whose ex-boyfriend is one of the players for one of the baseball teams at the game they're all watching. One kiss cam appearance and several punches to her date (one courtesy of Saylor to his nether region and a couple or so from Lock to the guy's face), life irrevocably changes for both of them. Six months pass before they see each other again, this time under better circumstances. The connection between them is still there, but even if they decide to act on it, Saylor's already got plans to return to her hometown after her dreams of living a more independent life fall to the wayside. With a bit of prodding, can Lock convince Saylor to stay in Kilgore and change their lives again?

Let them eat cake...and fall in love, too! A hot motorcycle cop and a sweet ultrasound technician find each other twice, with some help from fate, family, and friends in Lani Lynn Vale's newest installment in this fabulously entertaining series of hers. I adored Lock and Saylor and how there wasn't a whole lot of angst when it came to their relationship. I loved that Saylor was someone who chose to see the positive in her life, refusing to wallow in whatever challenges were thrown her way, choosing instead to focus on what she could learn from it and move forward. Then there was Lock, who was wonderfully protective of those who meant the most to him and didn't suffer from any sort of second thoughts when it came to the choices he made. He was forthright and stood by his decisions, having thought them over time and again before finalizing. Just like the previous books I've read in this series and her Bear Bottom MC series, there are characters from Vale's older novels, so I need to make time to go through her back list because hello, consider me hooked to her addictive tales! Five stars for Sinners are Winners. ♥