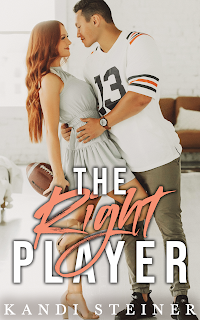 Note: An advanced reader copy (ARC) was provided by the author via Valentine PR.
The Right Player is a companion novel to Kandi Steiner's The Wrong Game, which was released almost two years ago. That being said, both books may be read independently of each other. So if you're either new to Steiner's writing or have yet to read The Wrong Game, feel free to dive right in. Of course, hopefully you'll be enticed to read the aforementioned sports romance or maybe check out some of Steiner's previous releases.
For those of you who are familiar with Steiner's books, you'll know that it isn't a secret that she's quite capable of writing several genres. She's also shown that she knows how to do heavier, more angsty fare AND lighter, more witty stuff. Well, this new book falls under the latter, and with so much going on in the world, this proved to be a welcome respite. It was clever and entertaining, and enough to leave readers feeling truly satisfied.
Belle Monroe has embraced the single life and has earned a reputation for herself. She also has a three-date rule, one she's stuck from the get-go. Professional football player Makoa Kumaka has a three-date rule of his own, but it's the complete opposite of Belle's. She wants nothing more than for him to break the rule, but being with Mak is teaching her that some things could be worth the wait. Will he make his play or is he playing her?
I loved that even as this was a more lighthearted romance from Kandi Steiner, that bit of angst was still present, and well, I haven't really kept my addiction to angst a secret. Belle and Mak were a study in contrasts, and that was part of what made their story such an enticing read. They could very well be the poster children for the old but oh-so-wise adage "Opposites attract," and boy, did these two attract! Five stars go to The Right Player.
Date Read: 28 September 2020
Learn more about Kandi Steiner.
Purchase The Right Player on Amazon.