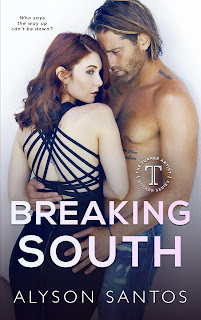 "I think I could have loved her," I say quietly.

A sheen spreads over her eyes. "Who?"

"The girl in the mirror."

Just when I thought Alyson Santos couldn't possibly impress me more than she already has with the first two books in her Turner Artist Rocker series, she goes and does exactly that with the third novel! I already had astronomically high expectations going into Breaking South, but when one of my most trusted romance novel-loving friends excitedly recommended the book after she'd read it, well, let's just say I couldn't wait to finish reading what I had scheduled so I could finally--FINALLY!!!--get started. And the thing was, by the time I reached the last page of this romance that had paired a pop star and a hockey player together, I didn't want it to end. But isn't that the case with the best stories?
Breaking South is the story of twenty-two-year-old Genevieve Fox, a world-famous singer and performer of popular music who is in the midst of an identity crisis. Her talent and popularity have given her the sort of career that has made her the envy of many, but she's reached a point where she no longer recognizes the girl in the mirror--or maybe she never was the girl reflected back at her. When she meets twenty-three-year-old Trojans goalie Oliver Levesque, he quickly becomes an unexpected beacon of light in a world that's lost its sparkle. His attitude in the midst of a terrible injury is inspiring, and he makes her want to be the best and most authentic version of herself. The last thing Genevieve wants to do is to let him go, but she may have no choice but to do exactly that when her world encroaches on his. Will Oliver let her or will he keep holding on instead?
Genevieve and Oliver's story was even better than I could have hoped for. These main characters have first names that mean something to me, but what made them etch their own place in my heart was how extraordinary they both were and how inspiring their love story and respective life stories were. Alyson Santos has been blowing my mind with this series, and every new book she releases within it leaves bruises on my heart. There's such beautifully written angst into Gen and Ollie's story, but you just know that their love will help them prevail in the end. My heart went out to Genevieve as she tried to figure out who she truly was and what it was she sincerely wanted going forward. And Oliver? The guy deserves to be in the hall of fame for book boyfriends. I know some prefer their male main characters as broody and alpha, but Oliver proves that nice guys don't always finish last, but it doesn't matter if they finish first because they're forever. I'm highly recommending you check out Breaking South (and the rest of the Turner Artist Rocker series) as soon as humanly possible. Five-plus stars. Can I have Finding East now, please?
-------------------------

Read my reviews for the Turner Artist Rocker series: