Review: The One that Got Away by Karina Halle 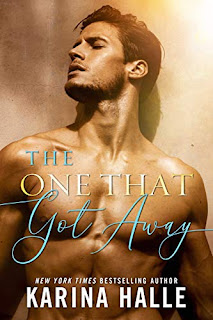 Note: An advanced reader copy (ARC) was provided by the author.
The One that Got Away is the newest novel from Karina Halle, and while it's a standalone, it also serves as a companion novel to The Forbidden Man, originally titled The Younger Man. Both books can be read independently of each other, but if you have read The Forbidden Man, then you'll recall Luciano Ribeiro, professional footballer. Well, this new book is all about him, and it has a second-chance romance feel to it, although in the case of Luciano and the woman who captured and held his heart for nearly an entire decade that their story takes place, Ruby Turner, it was more of a several-chances sort of thing.
Nine years ago, twenty-eight-year-old  Portuguese Luciano Ribeiro was recuperating from a shoulder injury when his twenty-three-year-old brother and agent, Marco, sets up an interview with a twenty-two-year-old American blogger and aspiring sports journalist, Ruby Thomas. A connection was there, one that had no chance to be explored, not when Ruby happens to be dating Luciano's brother, Marco. Over the years, their paths would cross time and again, and that connection remained palpable. The one time they crossed the line, it left Luciano saddled with guilt. It would take seven years for them to see each other again. Ruby was the one who got away, and this time, will Luciano still stay away?
The Forbidden Man was a really great read, so expectations were high going into The One that Got Away. Yes, they're two standalones with loosely tied threads connecting them, but those ties are still there, and Luciano made enough of an impression in the first book to warrant the excitement of readers and a spin-off of sorts. Both these main characters were passionate and had depth, and goodness, but how I wanted them to get their happily-ever-after. It takes years for them to get that, and that was due in large part to a whole lot of non-communication. So yes, there was a lot of angst, and I do love me my angst, but so much it Luciano and Ruby brought on themselves. There were swoony moments, and there were times my frustration level was exceeded, and I was glad I got to experience their journey to their HEA with them. The One that Got Away gets four stars.
Release Date: 20 September 2020
Date Read: 20 September 2020

Learn more about Karina Halle.
Purchase The One that Got Away on Amazon.