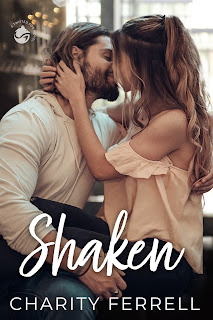 Note: An advanced reader copy (ARC) was provided by the author via Wildfire Marketing Solutions.
Shaken is the second book in the Twisted Fox series from Charity Ferrell, and it's an enemies-to-lovers story between two opposites who share a hot one-night stand that ends with a cold dismissal. Georgia Fox's first two encounters with the hot guy named Chase Smith are pretty unforgettable, but it's the third one that proves to truly be the charm. They have a one-night stand that rocks her world, but there are no repeats on the horizon. The impersonal and callous note he left her makes it clear that he wants her gone and the sooner the better. Georgia is so done with guys like Chase. Then she meets her older brother's new business partner, Archer Callahan, and he looks familiar--VERY familiar. It turns out that Chase Smith wasn't the name of the guy she spent that sizzling night with a month ago, it was Archer Callahan--the same one she now has to work with.
I'm pretty sure I'm not the only one who wasn't much of a fan of Archer's after he did what he did to Georgia. It took a bit--A LOT--of convincing for me to warm up to the guy and see that he did deserve to have someone like Georgia in his life, and once I found out why he was the kind of person that he was, I had a better understanding of what made him tick. Now, Georgia was someone who had a far sunnier disposition, and while she and Archer had very different personalities, she was exactly the kind of person that he needed in his life. It was great seeing the rest of the Twisted Fox peeps, especially Cohen and Jamie--and Noah, of course--and I'm already looking forward to seeing what awaits the next couple in this fun series. For now, I'm handing Shaken four stars out of five stars.
----------------------------
Read my reviews for the Twisted Fox series: