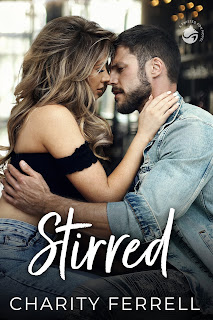 I liked Charity Ferrell's Blue Beech series, but I loved the start to her new Twisted Fox series! Stirred is a romance with a touch of the forbidden stirred into it. (See what I did there?) We have Cohen Fox, a single father and owner of a popular bar called Twisted Fox. For the past five years, his world was all about his son, Noah, his sister, Georgia, his closest friends, and Twisted Fox. Then one visit to the emergency room finds him face to face with one of the women he'd hoped to never see again--Jamie Gentry. She's now Noah's attending doctor, but she also happens to be the younger sister of his ex, the same ex who wanted nothing to do with Noah and left him and Cohen behind with nary a glance back. She hopes to establish some sort of relationship with her estranged nephew, but Cohen is wary. Allowing Jamie into Noah's life may invite heartbreak for his son, yet Cohen never imagined his own heart was at risk, too.

Chemistry is a must when it comes to romance novels, and this pair had it in spades. I loved the connection that Cohen and Jamie shared, and when you add Noah as well as Georgia and Cohen's friends into the mix, the becomes an endearing combination of friendship, romance, and family. The complications in any sort of romantic relationship between the main characters were obvious from the get-go, and there was a lot of back and forth that happened, but that was expected as well. I was very much invested in these two plus the family they were creating with Noah. I'm also super curious about several other couples, one of whom is already slated for the second novel in the series and others that feel quite promising. Giving Stirred 4.5 stars is a no-brainer, as is adding book two to my TBR list. 🖤