Review: Love the One You Hate by R.S. Grey 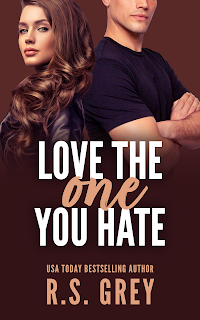 No hate but a whole lot of love for R.S. Grey's newest standalone! Love the One You Hate is, as the title may have clued you in, an enemies-to-lovers romance. Twenty-three-year-old Maren Mitchell is a young woman who hasn't had the greatest lot in life. A foster child who had to fend for herself early on, she's learned to put her head down and do the work required in order to have enough to take care of herself, but she's not one to ever not offer a helping hand when needed. Working as an orderly at Holly Home is by no means glamorous work, but it keeps her afloat, if not barely. When an unexpected opportunity to become the companion to the matriarch of one of the wealthiest and most iconic families around. But while Maren may get along with Cornelia Cornwell rather swimmingly, her grandson is a whole 'nother matter. Nicholas Hunt doesn't hide the fact that he doesn't like Maren--not one little bit. He doesn't trust her, and she can't stand him; but underneath all that barely hidden hate is an attraction that's threatening to singe them amidst all that heat. Could it leave them both badly burned, too?

This was a sweet read, and one that came off as quite inspiring, and it's all thanks to the female main character, Maren. I couldn't help but feel for her, especially given everything that she had gone through growing up, yet she never allowed it to crush her spirit. I liked seeing her evolve as a heroine, imaging that backbone of hers straighten and elongate as she gathered more courage and self-confidence. Nicholas was a good male main character, living up to my expectations of one of my favorite types of heroes: the broody kind. He had his reasons for reacting to Maren the way he did when they first met, and to be honest, I would have probably felt the same way considering everything their family had been through. Now, while I liked the romance between these two main characters, I must admit that my favorite relationship in the book was the one Maren had with Cornelia, Nicholas's grandmother. I swear, she made me think of my own grandmothers and my grand-aunt. All in all, R.S. Grey's Love the One You Hate has left me so happily satisfied while looking forward to what she has next for readers. 4.5 stars. ♥

Purchase Love the One You Hate on Amazon.