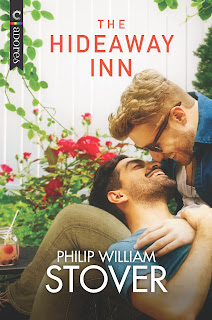 Carina Press has released LGBTQIA+ romances numerous times in the past, but now, they have a dedicate line called Carina Adores, and I've been eagerly awaiting it's first handful of releases ever since I heard about the new publishing line. Philip William Stover's The Hideaway Inn not only kicks off Carina Adores, but it also serves as the first first in the author's Seasons of New Hope series. Here, Stover offers up a small-town romance about finally taking a chance and opening yourself up to all the possibilities as well as truly embracing the most authentic version of yourself.

This series starter introduces readers to the small town of New Hope, Virginia and the main characters, Vincent Amato and Tack O'Leary. When they were in teens and Vinny and his mom had moved to town and he and Tack became fast friends over the summer. Come the beginning of their senior year, however, everything changed. A decade and a half from the time Vinny left New Hope, he's made his way back to flip an old inn called The Hideaway. He isn't there to reminisce or rebuild burned bridges, but Tack isn't easily dissuaded. His friend was back, and while it was clear that Vinny--Vince--had changed a great deal, Tack was convinced the old Vinny was somewhere in there. Maybe Tack could show that he wasn't the only one who's changed.

There was a lot of promise in this book, but I must confess that inasmuch as the author's writing and the story itself were noteworthy, there were things about this that left me wanting, particularly the cast of characters. Vince was a main character that was difficult to like for a good portion of this book. He did manage to redeem himself, but it happened far later in the story than I'd expected. Tack was a really good guy, almost too good, turning a blind eye to Vince's bad behavior for far longer than he should have. There was chemistry and I seriously wanted to see their story through and have them get their happily-ever-after. I just wish Vince didn't feel like an MC who was toeing that pesky line between being a hero and an antihero.

Side characters like Jules, Anita, Toula, Kevin, Evan, and Serilda caught my interest and I appreciated the diversity and representation, but they were like blips that I wish we had seen more of. Then there was Evie, Tack's ex-wife, and I kept waiting for a moment of...something, especially after what she said to Vince when they were in school, but there was nothing. Same with Tack's father, who popped in for a few pages, never to be heard from again. Basically, I wanted more--more development, more delving into, more interaction. With writing as marked as Philip William Stover's, I'm hoping that the best is yet to come as the series moves forward. The Hideaway Inn gets 3.5 stars. 🖤