Review: The Man Next Door by Roya Carmen (Orchard Heights #2) 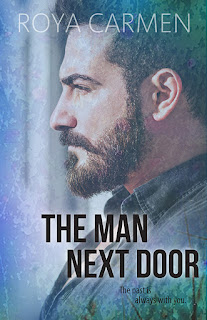 Roya Carmen returns with the second novel in her Orchard Heights series, and like the first novel, The Girl He Loves, this newest addition can be read as a standalone. The Man Next Door is actually the story of one woman and the two men who change her life. No, this is NOT a menage romance nor is there any sort of cheating involved. When Abigail Reed was growing up, she had two people who meant the world to her--her best friend, Izzie Reed, and the other closest person in her life, Gavin Foster. The latter was ten years her senior, and he cared more for her than her own father and two brothers ever did. Falling in love with him was inevitable, and even when accusations were thrown against him for a horrendous crime she knew he could never commit, her heart was fully committed to him. A tragic turn of events becomes the impetus that has Abby leaving her small town in Michigan, never to return. She's lived in Chicago ever since, though she hasn't done a great deal of living ever since Izzie and Gavin. She's merely existing. Then she meets her new neighbor, Noah Parker. He's the first man since Gavin that makes her feel--that makes her willingly fall heart first for him. But will she crash land once she learns his darkest secrets?

I don't want to run the risk of spoiling the read for anyone--and no, the above paragraph isn't really spoilery considering this is stuff that's mentioned in the book's blurb--so I'm going to keep this part of my review short but to the point. I enjoyed reading Abby's story, with Roya Carmen giving the life she once had in Michigan and the life she has now in Chicago. Her love for Gavin was life-changing, and how my heart broke for these two. With Noah, the connection was there, but it almost felt as if she was making up for lost time, meaning she wanted to live and love again and dove in without hesitation or question, so it came off as being rushed. The twist was one that I saw coming, but I appreciated the manner in which all was revealed. The Man Next Door satisfies and snags four stars. ♥

Read my reviews for the Orchard Heights series:

Purchase The Man Next Door on Amazon.