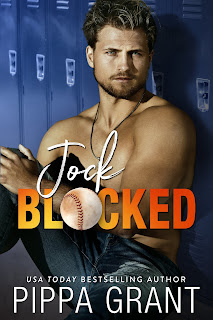 At the end of Liar, Liar, Hearts on Fire, I had two thoughts lingering in my head. First was how awesome the book was; second was how long would I have to wait to get my hands on the first book in the spin-off series. Well, Pippa Grant didn't make fans and readers wait too long, starting off her new Copper Valley Fireballs with hilariously entertaining Jock Blocked. This opening salvo in the series of books featuring the lovable losers that are the professional baseball team of Copper Valley, Virginia is about an unexpected trade, notable superstitions, and the kidnapping of a meatball. Yep, you read that right, and no, I kid you not. Meatball.

Brooks Elliott began his baseball career in his hometown of New York, and he believed that's where it would end once he retired. But he's just been traded to the Copper Valley Fireballs, the team that's been languishing at the bottom of the standings for years. He may only be thirty, but it felt like this was the beginning of the end for his career--like slowly being led to pasture. Sure, his new teammates seem like good guys and the Fireballs's new management appear to be dedicated in turning the team around. They're looking to Brooks to be a game changer, but what this team needs is a miracle...or maybe a very dedicated fan named Mackenzie Montana who wants her team to succeed, even if it means jock blocking its newest trade.

This was exactly what I needed to read this week--a book that made me laugh while also causing my heart to clench in my chest a time or two. Pippa Grant has quickly become a must-read, go-to author and I've made it my mission this year to work my way through her back list because I'm now curious about those characters and couples who have popped up in this book and in my previous reads from her ever since I finally started reading her work back in 2018. (I've only read Rockaway Bride, the Lili Valente co-authored Happy Cat series, Master Baker, and the Bro Code ones.)

Mackenzie and Brooks were a hoot and a half. These two weren't your typical cookie-cutter type of main characters. They were adorably quirky and wonderfully imperfect. They had their insecurities and there was an awkwardness to them that actually made it easier for me to relate to them. These two evolved as individuals as their relationship developed from strangers who met as a potential team mascot was being abducted to kinda-sorta-maybe friends who were attracted to each other recalibrated their own love for baseball and found more with one another in the process. Jock Blocked was a wholly enjoyable and endearing read, which is why I'm giving it five meatballs, erm, I mean stars, and flaming ones at that! 🖤