Review: By a Thread by Lucy Score 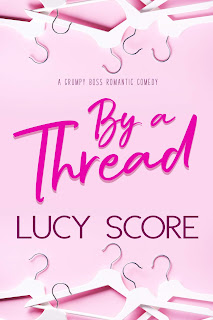 By a Thread is the latest romantic comedy standalone from Lucy Score. It's taken on the enemies-to-lovers trope and put it in an office setting, putting a feisty woman who doesn't back down from anyone and a man battling with the far-reaching shadow of the father he refuses to be anything like. Fair warning, though: This is a REALLY long book, far longer than I honestly thought it needed to be, but it was still an entertaining read overall, even if it isn't my favorite from the author.

After a scandal involving his father is kept under wraps, forty-four-year-old Dominic Russo is forced to step in and help his mother bring the magazine she founded back to a level of respectability and profitability. Because of the new work environment he finds himself in, he's been forced to rein in his temper. Unfortunately, he ends up taking it out on a server while he's having lunch with his mom. Oh, and he gets said server, aka thirty-nine-year-old Ally Morales, fired. Will he redeem himself once he finds out his mom has given Ally a job at the magazine, or could Dominic find himself now following his disgraced father's footsteps?

This rom-com had quite a few humorous moments, but it surprisingly faltered in certain spots. It took a good, long while for me to see Dominic in a better light. His treatment of and attitude towards Ally was off-putting, although when those layers are peeled away and you get to know why he is the way he is, he becomes a far more sympathetic character. Ally herself was far from perfect, making unwise decisions at times because of her pride. However, her love and dedication for her father made her endearing. So, like its main characters, this book isn't perfect, but I did enjoy reading it, and that's why it's easy for me to give By a Thread four stars. 🖤

Purchase By a Thread on Amazon.