Review: That's the Way I Loved You by Carrie Aarons 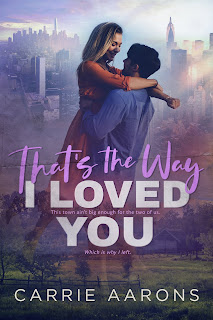 Carrie Aarons's new standalone brings together a couple of popular tropes--second-chance and small-town--and has come up with a sweet romance about coming back home, forgiving yourself, and finding love and family once again. In That's the Way I Loved You, Aarons introduces readers to Savannah Reese, a twenty-nine-year-old scriptwriter hoping to move into a new apartment with her boyfriend of four years only to find out that property she co-owns back in her hometown of Hale, Texas has liens on it and is close to foreclosure. In order to get everything in order, Savannah needs to return to the very same small town she ran away from ten years prior and settle whatever needs to be settled with the other property owner--her ex-boyfriend, Jason Whitney. He was the love of her life and the one she had planned a future with. But when an injury curtails Jason's football dreams, he goes into a tailspin, so that when Savannah needs him most, he's nowhere near capable of being her pillar of support. Now she's back and she wants is to cut any and all ties with Hale and return to New York. Being around her hometown, family, friends, and Jason could give her the closure she needs or be Savvy's long-awaited opening.

Oh, Jason, Jason, Jason. This guy was my absolute favorite thing about this book! He made his mistakes, owned up to them, and went above and beyond to reach redemption. When it came to Savannah, I admit that I had my reservations because when she left, she burned her bridges with everyone who mattered to her, and it never really felt like she regretted it all that much in the decade that she was away in New York. I get why she felt the need to leave, and I even understand why she chose to not reach out to Jason, but to the point that she froze out her family? Yeah, that gave me pause. I also wasn't a fan of how she made certain assumptions about Jason or how there wasn't much interest to spend time with family. I do like, though, that the author made her relationship with her current boyfriend, Perry, one that had some genuine care and respect. Naturally, the opening was there for her to contemplate that maybe what she had with him wasn't all that, but thank goodness he wasn't painted as some villain who treated Savannah terribly. Carrie Aarons creative touches made this story stand out from other second-chance romances set in a small town, and I truly did enjoy reading That's the Way I Loved You. This gets four stars. ♥

Purchase That's the Way I Love You on Amazon.