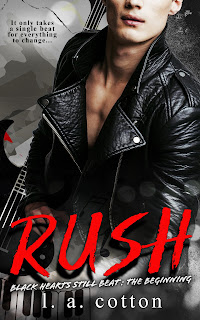 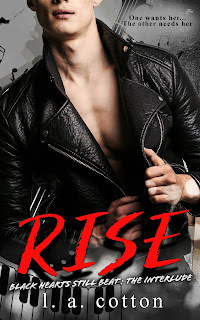 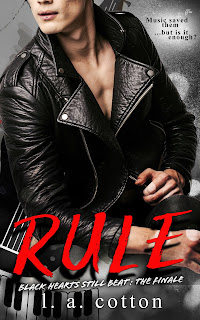 Note: Review copies were provided by the author via Give Me Books Promotions.

Rush, Rise, and Rule are the first three books in L.A. Cotton's Black Hearts Still Beat series AND they're my introduction to this author's writing. There's a fourth book in the offing, but that's more of a spin-off and you'll know why if you're familiar with this original trilogy that covers the romance between a country singer named Evangeline Walker and Rafe Hunter, bassist for rock band Black Hearts Still Beat. This review is for all three books since I read them one after the other in a three-day period, and it just felt like a better idea, at least to my mind, to consolidate all of my thoughts into one review rather than having to spread them out over three separate reviews.

Rush: The Beginning is a prelude of sorts, digging into the beginnings of the romance between the main characters, Evangeline Walker and Rafe Hunter. Their paths cross when Eva joins a musical talent contest and Rafe's band mate happens to be one of the judges. This is more novella in length but it doesn't feel rushed--pun not intended!--although it does provide a clear visual of the rush--pun intended!--of emotions that swirl between Eva and Rafe. We also meet the rest of the band--lead singer Levi Hunter, who also happens to be Rafe's brother, drummer Hudson Ryker, who is Rafe's best friend, and Damon Donnelley, guitarist--as well as get some background on Eva and what she went through prior to embracing her dream of a career in music again. I'm giving this book four stars.

Rise: The Interlude is the longest of the three books and is truly the meat and bones of the trilogy. Eva joins Black Hearts Still Beat on their tour, with the band's label and management pinning their hopes on the rising country singer to provide some much needed positive spin on the band, especially Levi. With the way Rafe nipped his romance with Eva in the bud, there's a great deal of tension between the two of them. Add in the complication of Levi who just happens to be developing feelings for Eva. This sort of love triangle isn't entirely new, whether it be in the rock star romance sub-genre or elsewhere, standalone or series. L.A. Cotton, however, adds her own creative spin, making for a wholly enjoyable read, which is why this book happens to be my favorite in the trilogy. 4.5 stars.

Rule: The Finale concludes Eva and Rafe's story. Here, the two lovers are forced to deal with the aftermath of the revelation of what they were hiding from Levi and everyone else. This isn't a necessarily short read, although it is longer than the first book, and it did wrap things up nicely. I will say, though, that this didn't have the oomph that the middle novel had. Yes, it was sweet, and yes, Eva and Rafe get the happily-ever-after they deserve, but I wanted a wee bit more. Maybe that'll come with the fourth book, Ruin: The Encore, which is Liam's story and is set for release in November according to pre-order links up in a couple of e-retailers. I'm also hoping we get books for the rest of the band. Fingers and toes crossed! Four stars for Rule, and I can't wait to read book four later this year. ♥