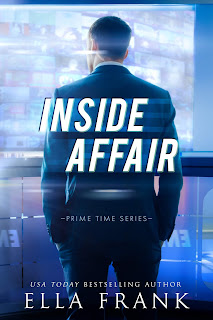 Ella Frank's new Prime Time series is one that I've been hoping for ever since I came across the main characters in the author's last two Confessions books, i.e. Confessions: Henri and Confessions: Bailey. That being said, if you're new to this author or have yet to read the aforementioned Confessions books this trilogy has been spun off of, no worries! You'll be able to navigate through this series starter without feeling as if you're missing something important. However, allow me to give you a quick tip: Read the Confessions series. Why? Because they're fab reads and quintessential Ella Frank. If you have more time on your hands, maybe check out the rest of the books in the author's Chicagoverse, too.

Inside Affair is the first book in the Prime Time series, and it's set in the world of broadcast news in the city of Chicago. Being the host of ENN's Global News with Alexander Thorne has made Xander a household name, with his professional work earning him awards and recognition and his celebrity more attention than he'd prefer. Unfortunately, it seems that it's also made him a target for a stalker who appears to be threatening Xander. When the network's head insists that Xander get a bodyguard, the person he ends up turning to is none other than his best friend's oldest brother. Yes, Sean Bailey is good at his job as a detective with the Chicago PD, and he's known Xander forever. However, Sean has a habit of getting on Xander's nerves, so when his new bodyguard suggests he go undercover as Xander's boyfriend, the news anchor worries they won't be able to pull off being a couple. Maybe they should have worried more about pulling it off too well.

What a great beginning to the trilogy! It was a slow burn romantic suspense opener that had all the delicious tension between the main characters while. Ella Frank lay the groundwork for what is a promising series, and with Sean and Xander, the back and forth as they bicker and banter as longtime friends connected by their relationship with Bailey, Sean's brother and Xander's best friend, belies their evolving feelings the more time they spend together. There are complications, not least of which is the stalker who unravels further as the object of his affections (aka Xander) flaunts his new "boyfriend" (aka Sean). While Inside Affair ends in an expected cliffhanger, the way it did left me rather gobsmacked AND desperate for the second book, which is due for release in late July. Sigh. Maybe it's best I think of "patience" as "delayed further gratification", as is often the case when I have an Ella Frank cliffhanger to live with. Five stars. 🖤

Purchase Inside Affair on Amazon.