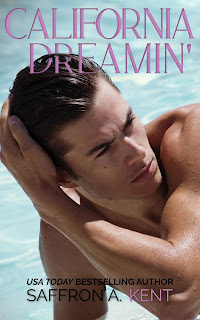 Originally released in January of last year with the title Guys My Age and by way of the multi-author Mixtape anthology, California Dreamin' has been published as a re-edited and re-worked novella. This book is part of the Heartstone series, and while you could read this as a standalone, the presence of one or both of the couples from the first two full-length novels may have you wanting to know the back stories. Medicine Man features the romance of the female main character's parents while Dreams of 18 is about a couple who is very close to said parents.

Fallon Blackwood has loved Dean Collins for years and she swore she'd marry him someday. But then Dean upped and left without a word of goodbye two years ago, leaving New York and the family he considered his own confused and the girl who saw him as her best friend and the man of her dreams heartbroken. Now, Fallon has decided the time has come to declare her feelings for Dean. She chose to go to college in California for a reason, and a cross-country drive back home for the holidays with him should be more than enough time to show him they belong together...even if she is only eighteen and he's thirty-two.

Like the two other books in the series, this carries with it an age-gap theme as well as that hint of the illicit. I likes Medicine Man, but Dreams of 18 didn't quite connect with me as much as I wish it had. With California Dreamin', Fallon and Dean were standout main characters and their story was one that I truly loved experiencing once again given that I read the previously published version in Mixtape. Saffron A. Kent is an author whose work I've read and enjoyed in the past, and same goes for this novella. Where this falters for me is having the main characters from the other Heartstone books as well as what I suspect is a future one have their own viewpoints included. I wish the focus has remained solely on Fallon and Dean, especially because the two older couples already had their time in the spotlight and the younger one will get their own time in the future. So, all things considered, I'm giving California Dreamin' 3.5 stars. 🖤