Audiobook Review: The Other Side by Kim Holden, narrated by Various Narrators 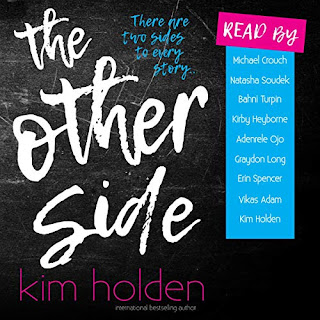 Just like the eBook edition was my introduction to Kim Holden's writing last year, the audiobook edition of The Other Side marked my first listen to anything she's penned, so it seemed rather fitting. This also had a cast of narrators, which isn't a first for me, but most of the audiobooks I listen to tend to have two narrators and that's followed by those with just one narrator. I confess that I was tad wary of the whole multiple voiceovers aspect of this audiobook because the last one that had more than two VOs wasn't a favorite of mine. However, I decided to take my chances because I absolutely fell in love with the story when I first read and was curious to see how it would translate as an audio.

The Other Side is a standalone young adult (YA) novel and it remains one of the most compelling stories of any genre that I've had the distinct privilege of experiencing as of late. Kim Holden doesn't give you a main character wrapped in shiny paper and bombards with you with reasons why they're the most awesome MC to grace the proverbial page. No, Toby Paige is far from perfect, and you won't hear me complaining becayse I don't look for perfection in my MCs. This seventeen-year-old was someone so compelling that I needed to know him beyond the facade that he presented the world. When eighteen-year-old Alice Eliot comes along, life as Toby knows it shifts in ways he never predicted.

Now, a story as compelling and magnificent as the one the author has written deserves an equally remarkable narrator. Except we get that times nine. This audiobook restored my faith in multi-narrator casts. Out of the nine, I'd only come across two of the narrators before. These voices blended exceptionally well together, meshing in a way that made me lean back in bed with my earphones on and it felt like I was part of a group of people sharing their story with me. This certainly isn't the first audiobook that's left me speechless and impressed, but it is the first that's had as many narrators as it did. I implore you to listen to The Other Side as soon as humanly possible. Five-plus stars multiplied by infinity. 🖤

Purchase The Other Side on Audible.