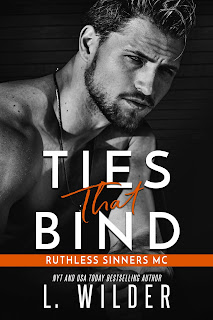 A new series, people! Yes! L. Wilder has a new motorcycle club romance series, and if you're familiar with her writing, you'll remember that the Ruthless Sinners MC made a memorable appearance in the author's popular Satan's Fury MC: Memphis series. Well, now they've got their own eponymous series, and it kicks off with the club's sergeant-at-arm's story in Ties That Bind. Zander Michaels had a good life growing up, but there was always a part of him that felt like it was missing...until, that is, he became a part of the Ruthless Sinners. Given the road name of Hawk, his loyalty belongs solely to his brothers. He's quick to step-up when one of their usual suppliers slips up more than once, and it's time for the club to get answers. What he doesn't expect is to have to watch over the guy's sister, and it's clear from the get-go that Delilah Davenport is as feisty as she is gorgeous. The club is Hawk's family, but Delilah calls to a side of Hawk that no other woman ever has before. When push comes to shove, will Hawk be forced to choose between the brotherhood he pledged his life to or the woman he's fallen for?

This was a really strong start to L. Wilder's new series, and while most of the focus was on Hawk and Delilah's developing relationship, I liked the snippets we got of the rest of the more memorable guys who made up the club. The main conflict in terms of the romance was one of the more complicated ones that I've come across in all of Wilder's books that I've read. There were several ways that she could have chosen to resolve it, and I'll be honest, I was worried with one in particular and what it would mean for the couple. Thankfully, she went in another direction (yay!), and I really enjoyed seeing Hawk make a concerted effort to merge his personal life with the one that he shared with the club. There was a twist that was rather out of the blue, but the author managed to tie almost everything together, save for the mention of one of the girls at the strip club and how that seemed to have just disappeared as the book progressed. All things considered, I enjoyed the heck out of this book, and I have high hopes that this could turn out to be my newest MC romance addiction going forward. Four stars for Ties That Bind. ♥

Purchase Ties That Bind on Amazon.