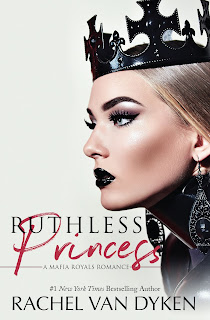 Oh. My. Word! When Rachel Van Dyken told her fans and readers what her new series was going to be about, I kid you not when I say that the anticipation from that moment on has been fevered to say the least. Mafia Royals is a standalone series, but it is a spin-off of the author's much-loved Eagle Elite series. Do you need to read the original series? Not really, but, and me saying this isn't going to be too much of a surprise if you're familiar with my reviews, I do recommend that you check out the Eagle Elite books for two reasons: there's a heck of a lot of history regarding the families and their ties to one another, and the series is simply an addictive read, so why not see what all the fuss is about? Again, you could still read this new series and appreciate it without reading the original one; however, I must insist that you peruse Royal Bully, which is the prequel (and a free one at that!) to the series since it's where the relationship between the Abandonato mafia princess and the sole Nicolasi heir excruciatingly shifts.

Ruthless Princess is the story of twenty-year-old Serena Abandonato, eldest daughter of Nixon and Tracey Abandonato and heir to her father's throne, and twenty-one-year-old Phoenix Nicolasi (formerly DeLange), namesake and sole heir of his father's legacy. They kept their love for each other a secret, but they should have known that there is no such thing within their world. When once the glimpses they shared were of love and lust, the looks Serena and Junior now exchange are filled with hate, although the lust is something that neither one has been able to get rid of. No longer best friends and never to be lovers again, the two have become enemies. Will the Cosa Nostra be able to survive when the ties within the next generation become frayed to the point of breaking?

What's better than a friends-to-lovers or an enemies-to-lovers romance? Why, a friends-to-lovers-to-enemies romance, of course, and when it's one that's come from an author like Rachel Van Dyken, then you can expect it to be a must-read--just make sure you buckle up and are prepared for a ride unlike any other. My heart went out to both Serena and Junior. Sure, they may have been actual mafia royalty, but that meant a whole lot more pressure and the kind of expectation that regular people couldn't possibly fathom. Everything happens for a reason, and that was certainly the case when it came to these two, but then when something is worth fighting for, you need to be able to get your head--and heart!--on straight and make painful choices. I was on the edge of my seat for so much of Ruthless Princess, and by the time I was done, I had a five-starred Mafia Royals hangover. Book two next! ♥
-------------------------
Read my reviews for the Mafia Royals series: