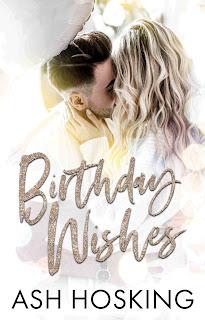 Ash Hosking is a new-to-me author and her newest novel was my introduction to her writing. Birthday Wishes is a second-chance romance between two best friends who always felt like they were more only for one to stay in their hometown while pushing the other away. A decade later, Sadie Frost has made a heartrending return to Grevillea Falls to say one final goodbye to her beloved grandmother. Seeing the girl, now woman, he let go of has Dustin Kingston more than ready to prove to Sadie that this time, he's going to hold on to her and finally fight for their future together. But neither Sadie nor Dustin are the individuals they once were, and being friends again may be easier than hoping for more and risking heartbreak all over again.

This was a good read, one that held my interest from start to finish. To be honest, the title didn't really make sense until it was mentioned much later on that Sadie was turning thirty (side note: Dustin is thirty-three). The story itself was quick-paced, at times feeling as if it were going at too much of a fast clip, rushing towards whatever awaited Dustin and Sadie next. That being said, I did enjoy how these two re-established their relationship, one that seemed like it was toeing the line between platonic and passionate from the beginning. There are some interesting supporting characters, but there are mostly only glimpses of them, with the spotlight solely focused on Dustin, Sadie, and Ellie. Who's Ellie? Well, you'll have to read Birthday Wishes to find out what role she plays. This novel gets four stars. 🖤