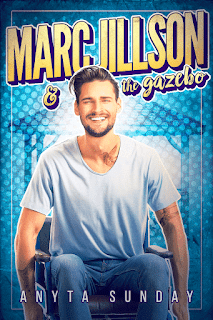 Ah, you can never go wrong reading one of Anyta Sunday's books! Her latest novel is proof positive of that. Marc Jillson & the Gazebo is the second story in her Love Inscribed series, and yes, this is a standalone. Prepare yourselves because I'm about to say something that, well, isn't all that shocking if you're familiar with my reviews. I'm going to recommend that you read the first book, Liam Davis & the Raven, before reading this new book. Not only do the main characters in Marc Jillson & the Gazebo appear in book one, but the story line in the series starter does carry over in terms of the aftermath of the events that played out there. However, if you insist on going straight into this book, no worries. The author has written this second Love Inscribed in a way that you do get more than enough of a firm understanding as to what happened and how it all affected the recurring cast of characters.

Twenty-two-year-old Marc Jillson is trying to come to terms with his abhorrent behavior and terrible life choices. He isn't quite sure how to make amends or if any attempts at asking for forgiveness will even be welcomed by those he's hurt over the years. There's his uncle and then there are those he worked with on Scribe, the campus paper. Over the summer, the only connection he's made and kept has been with a guy with the username "DaMage". Then there's the connection he starts to feel with Travis Hunter, Scribe's resident photographer. Marc's been in awe of him for some time, what with Hunter seemingly more put-together and adept at being a responsible and caring human being, all the more that they're the same age and that Hunter is a paraplegic. As strong as their connection may be, though, Marc is quite convinced Hunter deserves better than someone like him.

Okay, let me just say that the blurb for this book is a mere inkling of what awaits readers between the covers. There was so much more to this than Marc having feelings for Hunter. So. Much. More! There's more than one love story here. Yep. You read that right. MORE THAN ONE. GAH!!! And see, that's where the gazebo comes into play. This was such an important setting to many other couples past and present and an important part of the history of the campus as well. So, we've got Marc struggling to find redemption while also dealing with his growing feelings for Hunter and we've got the role he plays in the stories of other people. Now, that may sound confusing, but I'm trying to be good and not spill any beans that should not be spilled. So, I'm going to shut up now and simply tell you that you so NEED to read Marc Jillson & the Gazebo. Like now. Or well, as soon as humanly possible. Five stars! ♥