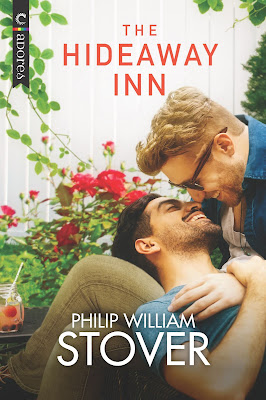 About The Hideaway Inn
High school wasn’t the right time or place for their relationship to grow, but now, fifteen years later, a chance encounter changes both of their lives forever.

No one in the charming river town of New Hope, Pennsylvania, needs to know that Vince Amato plans on flipping The Hideaway Inn to the highest bidder and returning to his luxury lifestyle in New York City. He needs to make his last remaining investment turn a profit…even if that means temporarily relocating to the quirky small town where he endured growing up. He’s spent years reinventing himself and won’t let his past dictate his future.

But on his way to New Hope, Vince gets stuck in the middle of nowhere and his past might be the only thing that can get him to his future. Specifically Tack O’Leary, the gorgeous, easygoing farm boy who broke his heart and who picks Vince up in his dilapidated truck.

Tack comes to the rescue not only with a ride but also by signing on to be the chef at The Hideaway for the summer. As Vince and Tack open their hearts to each other again, Vince learns that being true to himself doesn’t mean shutting down a second chance with Tack—it means starting over and letting love in.

Read my 3.5-starred review of The Hideaway Inn.

Add The Hideaway Inn on Goodreads.

Philip William Stover splits his time between Bucks County, Pennsylvania, and New York City. He has an MFA in writing and is a clinical professor at New York University where he is the former chair of the writing curriculum. As a freelance journalist, his essays and reviews have appeared in Newsday, The Forward, The Tony Awards, The Atlanta Journal-Constitution, The Houston Chronicle, The Milwaukee Journal Sentinel, and other national publications.

Philip grew up tearing the covers off the romance novels he devoured so he wouldn’t get teased at school. Now he enjoys traveling the world with his husband of over twenty years and sitting in front of the woodstove with their half-Bassett, half-Sharpei rescue pup and he would never consider defacing any of the books he loves.

He is thrilled to be returning to romance and loves to write cozy, warm-hearted stories served by hairy forearms with a side of fries. He can be found on social media as Philip William Stover. 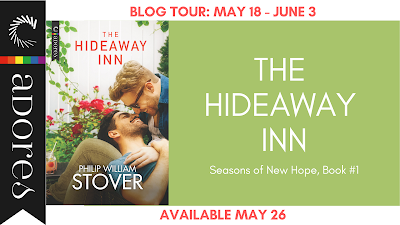