Review: The Rival Roomies by Piper Rayne (The Rooftop Crew #3) 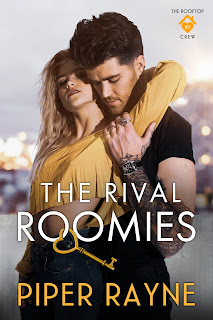 Ooh! I've been itching to read this third book in Piper Rayne's Rooftop Crew series ever since it was clear that there was something between these two particular character, and the authors have penned a friends-to-lovers romance with all the feels and then some! The Rival Roomies finds tattoo artist Dylan Phillips inviting himself as mathematician and textbook author Rian Wright's newest roommate after learning that Jax Owens, aka Dylan's nemesis, was now living with Rian. He's being very protective, but what he doesn't know is that Rian doesn't want him treating her like a friend or, even worse, a little sister. She's had a thing for him for quite some time, but she gets that she isn't his usual type of woman and he certainly isn't the type of guy that enters committed relationships with women. So, why is he acting the way that he is, getting in the way of Jax, who just happens to be the first guy who's shown any sort of non-platonic interest in Rian in what feels like forever? Could Dylan be overly concerned for Rian as her friend or could he actually be jealous of Jax? Now, what does all of this mean for them?

The Rival Roomies once again carries that bit of angst alongside the wit and humor, and the writing duo of Piper Rayne has consistently done this well. The series got off to a great start, although I will admit that the second book wasn't my favorite even though I did like it as a whole, but now these two have gotten right back on track as far as I'm concerned, with a great friends-to-lovers story with a kinda-sorta-maybe "love" triangle feel to it. I put the "love" in love triangle in quotes because it was clear from the get-go that this was Dylan and Rian's story. Can I also say that I'm glad that Jax wasn't made out to be some sort of villain who was put in the book to mess things up between the two main characters? He was such a great revelation and I REALLY hope we get his story and happily-ever-after soon-ish. Three couples down, and I'm quite excited to read the fourth one because of who it's going to be about. As always, Piper and Rayne give their readers that sense of anticipation and with the five-starred read that The Rival Roomies turned out to be, the bar is set high yet again, so my fingers are crossed for the fourth one. ♥