Review: My Bestie's Ex by Piper Rayne (The Rooftop Crew #1) 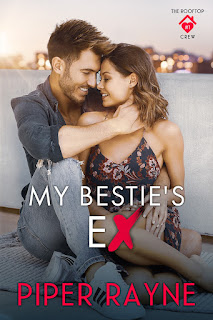 Whenever I have a Piper Rayne book waiting for me on my reading app, I know I'm going to be in for a couple or so hours of guaranteed literary entertainment. This writing duo kicks off their new series, The Rooftop Crew (which is a spin-off of their White Collar Brothers trilogy), with My Bestie's Ex. As you could probably already tell from the title alone, the story is basically about one of the main characters falling for the ex of their best friend. Someone slap the hashtag of complicated on this because yes, nothing is as complicated as becoming involved with someone who was once with your friend. Heck, it could be your sibling or some other relative that they were in a relationship--or even just dating!--and it would be considered a no-go. But tell that to a heart that's already fallen.

Leaving behind a career in finance--one that she'd studied her butt off for--in exchange for one in journalism may not sound like a good idea to many, but twenty-eight-year-old Blanca Mancini has done not only that but has moved from New York City to Clifton Heights as well. She's rekindled her friendship with her best friend and life is looking up, especially after she meets a hottie on the train. Ethan Ryland is as gorgeous as he is a seemingly good guy, but then he turns out to be one of her new coworkers and he happens to have a rule against dating someone who works with. However, Blanca has a rule of her own: never date someone her friend used to be with. And that's exactly who Ethan is--her best friend's ex. She'd never risk her friendship for a any guy. But what if he's "the one"?

Ah, but how I adored Blanca and Ethan! These two had the sort of connection that was worth fighting for, and goodness, but how these two had to fight for their happily-ever-after. The complication to their romance is right there in the title, yet there's so much more to their story than just that complication. I loved how their interactions felt effortless, as if to highlight that they were totally meant to be. As far as Blanca's bestie and Ethan's ex, Sierra Sanders, goes, well, I absolutely got where she was coming from with regards to her reaction. It honestly felt more realistic to me. The rest of the Rooftop Crew were wholly entertaining, and I can't wait to get to know them even more as the series moves forward with books two to six. It's already off to a five-starred start with My Bestie's Ex. ♥