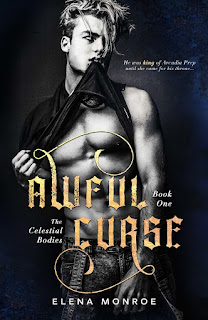 Elena Monroe is a new-to-me author and Awful Curse, the first in her mature young adult urban fantasy series titled Celestial Bodies. Arianna is a girl who's never had roots, moving from place to place due to her father's military career. Through the years, she's grown increasingly resentful over having to pack up and transfer to yet another house and another school. She's cut ties from people who came to matter too many times. Now, she finds herself at Arcadia Preparatory School, and it's a school that's unlike any other she's attended. Sure, there's an "it" crowd--the students who are head and shoulders above everyone else, ruling Arcadia Prep from their pedestal-propped thrones. Their led by Bolton, and this king relishes in the chaos swirling around him. Arianna has caught his attention, but while he may think she's the queen who will rule by his side, it turns out she's chaos personified.

This was certainly an interesting introduction to Elena Monroe. She's brought her own creative touch to a story inspired by Greek mythology and Western astrology, and her writing left quite an impression. The cast of characters was notable, and I confess that there are a couple of supporting characters that I'm eager to get to know even better as the Celestial Bodies series moves forward. Ably led by Arianna and Bolton this go-around, I quite liked that the Arcadia Prep group was a composition of circumstance rather than choice, so seeing the dynamic among all of the major players was intriguing. It did take several chapters for me to fully get into the pairing of Arianna and Bolton. As individuals, they egged on my curiosity, but as a couple, I may have needed some convincing. However, once I was good, I was all in. Awful Curse snags four stars, and yes, this ends in a cliffhanger. ♥