Review: The Secrets We Keep by Mia Monroe 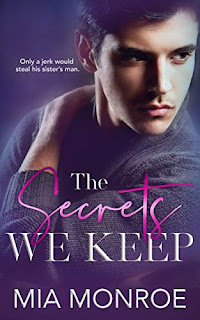 The Secrets We Keep is my first-ever read from Mia Monroe, and I'm happy to say that it lived up to my expectations. From the blurb alone, I had a feeling that I was going to be in for some angst, and my angst-addicted self was giddy over the fact that I got exactly that. The author makes it known from the get-go that there is cheating involved, but since that isn't a hard limit for me, I was good to go.

This is the story of thirty-one-year-old Leonardo Di Nuovo and thirty-four-year-old Cruz De Leon, Leo being the former stepbrother of Cruz's fiancée, Katherine Lane. I don't want to give too much away, but aside from the basics I just mentioned, Leo is openly gay, remains close to Katy, and considered a son by his former stepfather; on the other hand, Cruz is straight, has a strained relationship with Katy, and works for Katy's father. There are very obvious complications, but one thing is simple: Leo and Cruz have a connection.

Out of everyone in the book, my heart went out to Leo. Yes, he knew what he was getting into with Cruz, but the guy was simply looking for that one person who would love and accept him for who he is without any qualifiers. Cruz was okay, but gah, I so wanted to shake him at times. Admittedly, I wasn't a Katy fan, not with her treatment of both the man she claimed to love like a real brother and the man she was engaged to marry. There was drama and angst, but there were also quite a few more lighthearted moments, so it isn't as heavy a read as you may think. The Secrets We Keep was a four-starred introduction to Mia Monroe's writing. ♥

Purchase The Secrets We Keep on Amazon.