Review: The Guy in the Middle by Kate Stewart (The Underdogs #3) 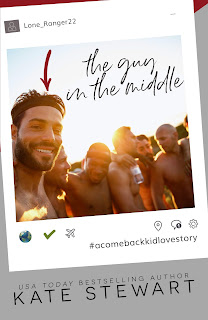 “What if this moment, right here, is the moment that changes your life?”


From the moment I read Lance Prescott and Harper Elliott's story in the multi-author Team Player 2 anthology last year, I knew that their full-length novel would be one of my most anticipated reads for 2020. Now, here I am, more than seventy-two hours after having read The Guy in the Middle, I'm still in the midst of a days-long book hangover. Goodness but how this book got to me, what with it putting me through the emotional wringer and all. Just like the first two books in the Underdogs series--The Guy on the Right (Theo Houseman and Laney Cox) and The Guy on the Left (Troy Jenner and Clarissa Arden), respectively--this third and final story was extraordinary. However, there was just something...more about it. I don't know if I can properly explain what I'm talking about, but I remember mentioning in my review for book two that the snippet that was in the Team Player 2 anthology took a piece of my heart. Well, now it lay claim to the whole thing, bruised and battered by still very much beating by the end of it all.

Being a senior and the cornerback for the football team in Texas Grand would be more than enough pressure for any college student athlete, but Lance Prescott's shoulders are weighed down by responsibilities to his family and their ranch. He's focused on getting drafted and making it big as a professional football player, knowing that the money he could bring in will help secure their family's legacy. He definitely doesn't need anyone or anything derailing his plan, but then he hadn't planned for someone like the firecracker he's forced to share private gym time with. The twenty-year-old named Harper is mouthy and has no qualms cutting Lance down to size. She isn't awed by who he is or what he could become. She dances like she was born to do nothing else, and Lance finds himself surprisingly smitten by the girl who is nothing like his usual type. She sees and accepts him for who he is. Theirs feels like a once-in-a-lifetime connection, but then Lance learns that Harper's last name is "Elliott"--as in Coach Ryan Elliott, Texas Grand's football coach and Harper's father. Is their love worth the complications to come?

I have three words for you: READ. THIS. BOOK. Wait, let me add on a fourth one: NOW!!! Seriously, you're going to miss out on what is one of the best romance novels of the year if you don't read this. I discovered Kate Stewart's writing in 2017, and she's easily become one of my favorite go-to authors, with at least one of her books landing on my annual year-end list of top reads--and those were all standalones. With her Underdogs series, the first two books did, indeed, end up on my list for 2019, and they had set the bar impossibly high for this final installment. And well, Lance and Harper's story impressively knocked that bar aside and soared past it. There were obstacles upon obstacles that were set before these two, and even when they would hurdle over one, there would be a new one erected next. But theirs is a love that would endure. Yes, they sacrificed and they persevered, but they also needed to remember to have faith in their love if there was any hope of it not just surviving but flourishing. It was also a tale about family and friendship--bonds that don't always come with guarantees, but the ones Lance and Harper had with those closest to them were rare and precious indeed. Countless stars go to The Guy in the Middle. ♥

Read my reviews for the Underdogs series:

Purchase The Guy in the Middle on Amazon.