Review: All the Letters I've Ever Read by Ace Gray (Handwritten & Heartbroken #2) 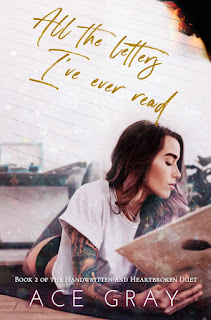 All the Letters I've Ever Read is the second novel in the Handwritten & Heartbroken duet by Ace Gray, and it picks up where the first book, All the Letters I'll Never Send You, left off. Told from the point-of-view of James Larrabee, the main male character, this conclusion to the duet highlights the peaks and valleys that his relationship with Mina McLennan goes through. No one said the journey to a happily-ever-after was easy after all, but these two would have to fight tooth and nail for that much deserved ending and to prove that they did, indeed, belong together. A quick note: You will need to read All the Letters I'll Never Send You before All the Letters I've Ever Read.

I have to be honest: I was really hesitant to even read this book. I was NOT a fan of the first one, particularly when it came to Mina. I didn't like her. At all. And with this being the continuation of the story she shares with James, well, how the heck was I supposed to feign interest when I didn't have a whole lot of affection for the heroine? But read this I did, and I'm happy to say that this was a far better reading experience than its predecessor. I think it had much to do with the change in POV. James wasn't someone who was comfortable with expressing himself with words, which was quite the opposite of someone like Mina who seemed to have no issue whatsoever putting to paper every single thought and feeling she had. James truly was the saving grace of the duet as a whole. I still wasn't a huge fan of Mina's by the end, but I did, thankfully enough, understand her a bit more. So, all things considered, All the Letters I've Ever Read turned out to be a four-starred read, with the duet averaging a 3.5 stars. ♥

Read my reviews for the Handwritten & Heartbroken series:

Purchase All the Letters I've Ever Read on Amazon.