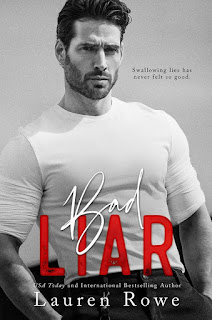 Bestselling author Lauren Rowe launches her brand-new series, Reed Rivers, with Bad Liar. Readers are introduced to the eponymous main character, and it's clear from the get-go that the man is dangerously charming. Reed Rivers gets what he wants and builds a reputation for himself as a man with the mythical "Midas touch". He's someone who's never been denied whatever he desires, but the one thing this thirty-four-year-old music mogul and owner of River Records doesn't need in his life is a relationship. The only commitments he enters into are the ones related to his work. He isn't looking to make any female believe that he's her knight in shining armor because he doesn't want to be one. And then Reed meets a twenty-one-year-old sexy spitfire named Georgina Ricci. She's nothing like the women he's taken to bed, but there's one thing that he knows for certain: she WILL be in his bed. Unfortunately for Reed, Georgie isn't easily impressed by his success nor is she the type to easily fall into bed with him. There's no denying she wants him as much as he wants her, but there's something Georgie wants even more.

Ooh! Color me impressed! Reed was the sort of guy that thought himself untouchable--or maybe more of his heart being untouchable--and he seriously needed a woman who could knock him down a peg or two. Well, Georgie was exactly that, and she more than give him a run for his money. Theirs was a cat-and-mouse game but knowing who the true hunter was is part of what made this such an awesome read. I loved how Georgie was confident and knew what she wanted. Going with the whole "bad" in the title theme, she was very much a badass in all the best ways possible. Now, now, that doesn't mean that Reed was a slouch by any means, but come on! Nothing is quite as appealing as having a female main character who isn't idly sitting by waiting for some alpha hero to swoop in and give her life meaning. I have no problem reading books like that, but heroines like Georgie are in a class all their own. While Reed may have been mentioned in Lauren Rowe's previous books, he was a minor character before, so you can safely dive into this series starter without reading the other novels. Bad Liar gets five stars. Book two next! ♥